In an incredibly dramatic end to the Tour de France, British cyclist Chris Froome was forced to run to Stage 12 after losing his bike in a bizarre accident.

.@chrisfroome is taking the Running Man Challenge a little too seriously… #TDF2016 https://t.co/U750gKwbtM

At the time of the accident, Froome was the leader of the Tour de France. The chaos began when Australian Richie Porte crashed into a camera bike which in turn also sent Froome spinning to the ground.

The Kenyan-born cyclist decided to take off in pursuit of Bauke Mollema on foot while he waited for his team car to bring him another bike. Froome didn’t like the first one he received, he apparently didn’t like the size. Eventually, Froome ended up riding his own Pinarello to the finish.

The yellow jersey for the race has been awarded to Adam Yates but it will be interesting to see what authorities make of the Froome incident. 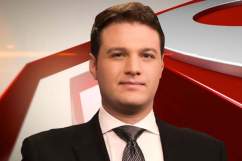 Read More
Breaking News, Weird News
Kenyan-born cyclist Chris Froome was forced to jog up a hill after losing his bike in a bizarre accident in the closing stages of the Tour de France.