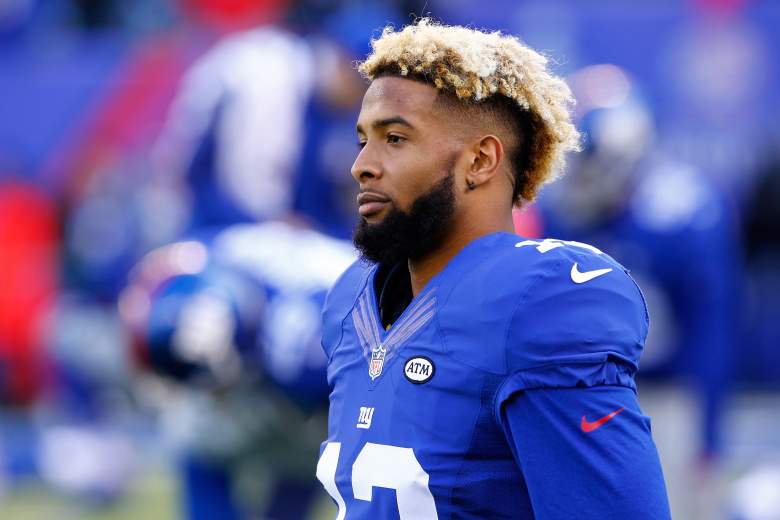 The New York Giants kick off their preseason against the Miami Dolphins. (Getty)

It was as odd of a preseason game as football fans can see. The Dolphins went on the road to defeat the Giants 27-10 to open up the preseason.

The start of the game was delayed nearly an hour as lightning was spotted near the stadium. Eli Manning and Odell Beckham, Jr. ended up siting out the contest once play began.

The Giants started off great with a 10-0 lead early in the second quarter. Miami would pull off an improbable run with 27 straight points and never looked back. After Ryan Tannehill threw just four passes, backup quarterback Matt Moore went 10-of-14 for 122 yards, one touchdown and one interception.

Here’s a full rundown of the action.

The Game Was Delayed Because of Lightning

Looks like this Dolphins vs. Giants preseason game will be delayed by lightning in the area. pic.twitter.com/2ofw354EDa

The game has been delayed because of lightning in the area. The delay lasted just about an hour before play began.

Rashad Jennings Scored the First Touchdown of the Game

Aaaaand RASHAD JENNINGS WITH THE #NYG FIRST TOUCHDOWN OF THE SEASON. GIANTS ARE BACK. pic.twitter.com/uc9qymNGpW

After close to an hour weather delay, the Giants got on the scoreboard first. Running back Rashad Jennings rushed for a three-yard touchdown. Despite picking up numerous running backs this offseason, it looks like Jennings will continue in his role of starting running back this season.

Matt Hazel Scored an Improbable Touchdown for the Dolphins

Just how they drew it up…

Matt Moore somehow, some way got this ball to Matt Hazel for a 51-yard TD. #MIAvsNYG https://t.co/WBMIAOcIXj

Backup Dolphins quarterback Matt Moore threw a pass intended for rookie Leonte Carroo that went through his hands. The ball found Matt Hazel for a 51-yard touchdown. After trailing 10-0 to start the game, the Dolphins rattled off 17 straight points in the second quarter to lead at halftime.

TOUCHDOWN #Dolphins on 4th and 1! Rookie TE Thomas Duarte with the TD catch for Miami. #FinsOn4

Zac Dysert connected with rookie tight end Thomas Duarte on a 16-yard touchdown in the 4th quarter. The touchdown gave the Dolphins a 27-10 lead as they scored 27 straight points.

Read More
Football, new york giants, NFL
The Miami Dolphins squared off with the New York Giants. We have highlights from the preseason game and a breakdown of the action.