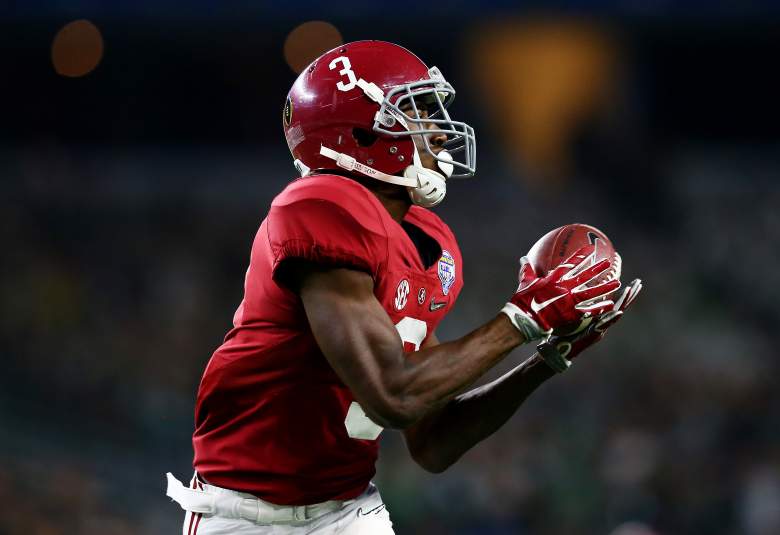 Calvin Ridley is one of the best receivers in college football. (Getty)

1 Alabama takes on 20 USC in the marquee matchup of college football’s opening weekend. The field will be covered with top NFL prospects with no shortage of talent on either side.

According to OddsShark, Alabama is favored by 11.5 points, and the point total is set at 52.5. Both teams enter the game with uncertainty at quarterback. USC will start Max Browne after the top recruit spent years as the backup to players like Cody Kessler. The answer is less clear for Alabama who did not publicly name a starter during game week.

The past few seasons have showed the Crimson Tide have the ability to survive and play at a high level despite uncertainty at quarterback. Cooper Bateman or Blake Barnett will have enough talent around them to help them steer the ship to a successful season.

USC has talent with playmaking wide receiver JuJu Smith-Schuster and the versatile Adoree’ Jackson. The problem is the Crimson Tide have more.

Alabama is 9-0 in season openers under Nick Saban. Playing neutral site games like Saturday’s contest in Arlington has become the norm for Saban’s team, and no program is better prepared to kick off the season with all the fanfare than Alabama.

Browne has all the makings of a good quarterback for USC, but will have a difficult day at the office against Alabama’s defense. Reuben Foster, Jonathan Allen and Tim Williams are just a few of the core players expected to have a key impact on the Bama defense this season.

The Crimson Tide have one of the deepest receiving units in college football led by Calvin Ridley, Robert Foster and ArDarius Stewart just to name the top of the depth chart. Look for USC to keep it close early but find themselves outmatched in the second half.

The OddsShark computer projects Alabama to cover with a 43.4-17.6 victory over USC. The computer is taking the over in the matchup. Heavy sides with the computer as well as Alabama rolls to a decisive victory in the fourth quarter.