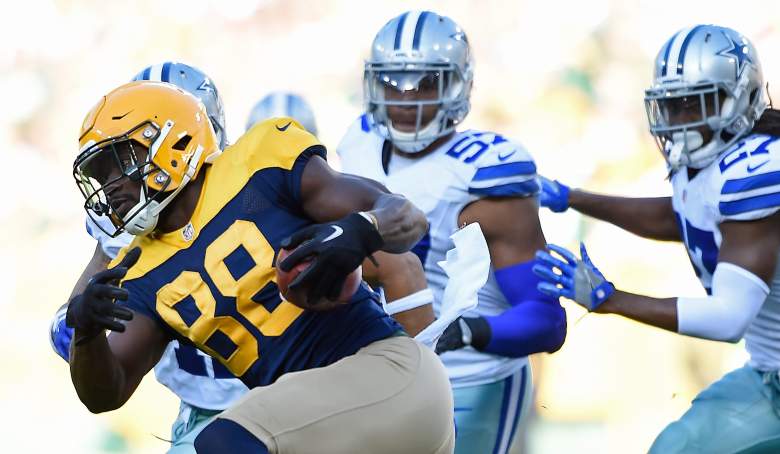 With word of Eddie Lacy heading to the Injured Reserve, there is suddenly a gaping hole in the Green Bay Packers‘ backfield.

Normally the carries would go to James Starks. But the backup is out for a while after undergoing knee surgery on Sunday.

So Tuesday morning, the Packers made a deal with the Kansas City Chiefs to acquire running back Knile Davis.

It is being reported it’s more than an ankle injury for Lacy and he’ll get a second opinion. A timetable for his return is unknown at this time.

Sources: The #Packers are expected to be without workhorse RB Eddie Lacy for several weeks. It's more than a sprained ankle.

#Packers RB Eddie Lacy is seeking a 2nd opinion from Dr. Robert Anderson in NC, source said. Should be weeks, but he'll know how much soon

So what are the options for Green Bay? And, of course, for your fantasy team?

Let’s take a look at the potential Lacy replacements and their fantasy football outlook:

Green Bay added Knile Davis in a trade with Kansas City earlier Tuesday. The Chiefs had high hopes for Davis, but it never really panned out for him. With Spencer Ware having a breakout season and Jamaal Charles finally healthy, Davis became expendable.

Fantasy Value With Green Bay: Davis will likely find himself on the field right away considering the state of Green Bay’s backfield. How many touches will he get Thursday night, though, is the big question. The Bears aren’t particularly strong against the run, but Davis has a just a 3.3 yard per carry career average and has just one touch in 2016. He’s been a pretty good touchdown vulture, though, scoring 11 TDs in 33 career games. But the only way you can start him in fantasy football is if your team is as desperate as the Packers were when they acquired him.

Davis can fly, but it’s a little concerning he never took advantage of his opportunities in K.C. Perhaps a change of scenery was what he needed. If you have an available roster spot, you can add Davis with hopes that it finally “clicks.” But let’s be realistic here. The chances of him carrying your team to a fantasy championship are slim to none. The Packers were desperate for a running back; they had to act. If Davis was a Chief this weekend, he’d probably be inactive Sunday. And eventually maybe cut.

Montgomery is actually a wide receiver. He wears No. 88. But in Week 6 vs. Dallas, he was deployed as a hybrid catching 10 passes and getting 3 carries. And word is Montgomery will be on the field a lot on Thursday night, taking hand-offs and being targeted in the pass game.

Fantasy Value With Green Bay: While Montgomery may indeed get a bunch carries Thursday evening, he is listed as a WR on pretty much all fantasy football game sites. ESPN says he won’t get an RB position added.

My expectation is that Ty Montgomery gets most work Thurs BUT – Ty's a WR in ESPN's game & will stay that way. So for our purposes, not a RB

With that being said, you can still use Montgomery as a WR or FLEX, if your league has that spot. Montgomery could be a sneaky play against the Bears considering how much Aaron Rodgers called his number. Montgomery’s best value might come in PPR leagues.

Randall Cobb played this Montgomery role early in his career. You might even see Cobb out there getting carries.

Jackson is a practice squad player, but will find himself on the active roster come Thursday night. The rookie out of Nevada was a free agent signing by the Packers a couple of days before the regular season started.

Fantasy Value With Green Bay: The Packers probably needed another “actual” running back on the roster than just Davis. Looks like Jackson is that guy. At least he has a grasp of the playbook. Unless your roster has a player or two you can drop, you probably can’t add Jackson. Though if you do have an extra spot, why not? You never know. But in all likelihood Jackson isn’t the answer for your fantasy team or the Packers. He’ll get some work tonight, but how much remains to be seen. The Packers weren’t a high volume running team with Lacy. That’s likely not changing with Jackson in the backfield.