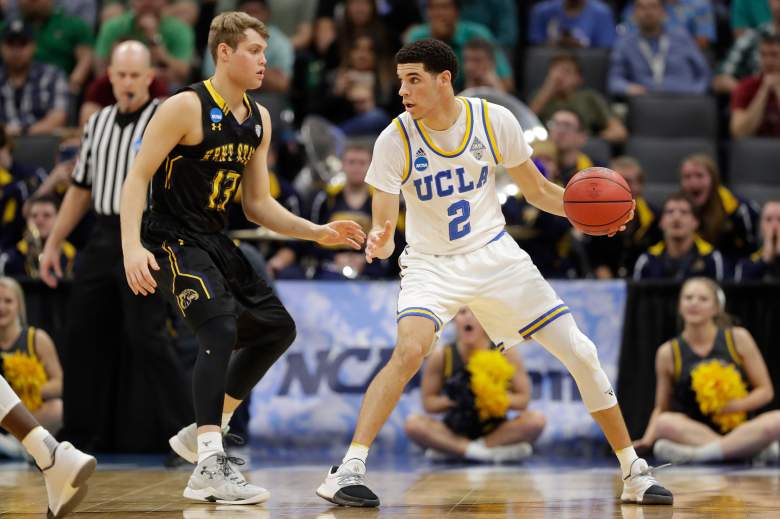 Lonzo Ball could be staying in Los Angeles to start his NBA career. (Getty)

If the NBA Draft Lottery were a movie, this is the way it would be scripted. For the next month, we will hear both the Celtics and Lakers remain non-committal publicly on who they are targeting with the top two picks.

As Adrian Wojnarowski pointed out, Danny Ainge will do everything he can to make the draft as cloudy as possible.

As those clouds descend, remember not to overthink things. Markelle Fultz and Isaiah Thomas already have a relationship based on their Seattle connection. The two played at the University of Washington, and Thomas frequently goes back to play in summer tournaments in the area.

On the other side of the country, there is a connection that has not been as quietly discussed. If Fultz goes to the Celtics, many people in Hollywood would get the ending they want. LaVar Ball has been telling us for months his son was heading to the Lakers. Truthfully, it looks like he is right. With Magic Johnson back in the front office, it is a perfect time for a reboot of “Showtime 2.0”.

The combination of Ball’s passing ability combined with his Big Baller Brand aspirations off the court is made for Los Angeles. Hollywood has no shortage of overbearing celebrity fathers so be sure LaVar will find his way into the script for good measure.

Ball grew up pattering his game after Johnson and now has a chance to be drafted by him. Ball spoke to The Vertical about Johnson’s influence on his game.

“I watched tape on Magic when I was young,” Ball told The Vertical, “and it’s why you can see it in my game. He liked to pass, I like to pass. He was a big point guard, I’m a big point guard. And I feel the way the game is played means a lot to him and me.”

The entire Ball family has been up front about their desire to stay in Los Angeles. Ball admitted to The Vertical he wants to be a Laker.

“The Lakers are in L.A., and they’re close to home,” Ball told The Vertical. “This is where all my family is. Hopefully, they have a nice pick and they have a chance to get me. I want this to be realistic. Just being very family-oriented, to play in front of them would mean a lot to me. The Lakers are a young team and they have a lot of young talent.”

ESPN’s Ramona Shelburne reports Ball may not agree to a workout with the Celtics. “We will make that decision closer to June, [it’s been] clear from the start our desired destination is Los Angeles,” an unnamed source from Ball’s camp told ESPN.

With the likely addition of a point guard, it looks like the Lakers are exploring whether D’Angelo Russell needs a new home. Sports Illustrated reported multiple NBA teams are weighing offers for Russell.

Wojnarowski reported the Lakers could have suitors to take on Luol Deng and Timofey Mozgov’s contracts if they attach young players and/or picks in exchange for a team taking on their deals.

Johnson has said he expects the Lakers to be “major players” in the 2018 free agency period which coincidentally coincides with Paul George’s free agency who has been frequently linked to the team.

While neither team will say much publicly in the coming days, all signs point to the Celtics taking Fultz then the Lakers selecting Ball to re-establish the Celtics-Lakers rivalry of old.

Fans are already envisioning Fultz and Ball in their new jerseys:

Heavy explores Fultz to the Celtics, Ball to the Lakers and the entire lottery in our latest NBA mock draft.