The NBA Orlando Summer League may not have nearly as much firepower as the Las Vegas edition, but there’s still plenty to watch when players and teams unofficially kick of the 2017-18 NBA season Saturday afternoon.

The New York Knicks’ post-Phil Jackson Era begins with Frank Ntilikina and a host of intriguing young players (you can find the complete roster for every team here). No. 6 pick Jonathan Isaac, who many regarded as this draft’s highest-upside player, gets his career started in front of the home-town fans. And then there’s Luke Kennard and Bam Adebayo, who will look to prove they deserved to be lottery picks.

Of course, while we know those guys will be on NBA rosters come October, perhaps the more intriguing part of Summer League is the dozens of guys fighting for a contract or even a spot on a D-League team. These showcases aren’t always the most beautiful displays of basketball, but they often shine a light on valuable role players who were otherwise largely unknown. It’s not only a good chance for fans to quell their thirst for basketball, it’s a prime opportunity for young players to prove they belong.

With that in mind, here’s a complete look at the schedule from the Amway Center:

Note: All times are ET. You can click here for a complete rundown of how to watch a live stream of every game 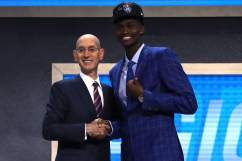