Gilles Muller’s thrilling upset over Rafael Nadal on Monday stopped the chance of a “Big Four” semifinal at Wimbledon, but with how good Andy Murray, Novak Djokovic and Roger Federer have all looked, we could be in store for an epic couple of days at the All-England Club.

Things will start getting really good in the quarterfinals on Wednesday. Murray continues his run at a third Wimbledon title when he takes on American Sam Querrey, Djokovic seeks his 13th straight win against Tomas Berdych, and in what has a good chance of being the match of the day, Federer takes on Milos Raonic, the man who eliminated Fed from Wimbledon last year.

Even the match without one of the “Big Four,” Muller vs. Marin Cilic, should be entertaining. They met at Queen’s earlier this year in a tough three-set battle.

Ultimately, Wednesday at Wimbledon sets up as a day you won’t want to miss. Here’s a complete look at everything you need to know to watch:

Note: First match starts at 1 p.m. local/8 a.m. ET. Matches are listed in chronological order. You can click here for the complete schedule of play for every court 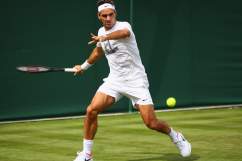 Wimbledon Live Stream: How to Watch Without Cable 2017