The Broncos take on the Chargers on Monday Night Football.

The Denver Broncos host the Los Angeles Chargers in the second game of a Monday Night Football double header. The game kicks off at 10:20 p.m. Eastern, and will follow the Saints-Vikings MNF matchup.

Line: Broncos by 3 (Line is according to OddsShark and subject to change.)

Game Preview: The Broncos take on the Chargers in an AFC West showdown. Trevor Siemian survived another quarterback competition to begin the season as Denver’s starter. The strength of the Broncos continues to be on defense, where linebacker Von Miller along with a strong secondary anchor the team.

The big question for the Broncos is whether their offense can take a step forward in their second year with Siemian behind center. Siemian still has a pair of veteran receivers to throw to in Emmanuael Sanders and Demaryius Thomas. The Broncos added Jamaal Charles to go with C.J. Anderson and Devontae Booker. It will be interesting to see how Denver splits up the workload.

It has been a tumultuous few months for the Chargers. Los Angeles lost rookie guard Forest Lamp for the season. First round pick Mike Williams has also been off the field battling a back injury. There has been no timetable set for his return.

The biggest problem in 2016 was the amount of punishment Philip Rivers withstood. There is little reason for Chargers fans to believe this will not be a problem again this season. On the bright side, Melvin Ingram and Joey Bosa are part of a defense that continues to improve. Running back Melvin Gordon had a nice bounce-back sophomore season, and will be the focal point of the Chargers offense.

Denver won the last matchup, and the two teams split their two 2016 games. The Broncos have won six of their last seven matchups with the Chargers. 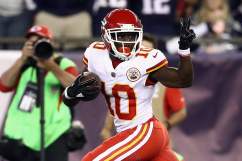