Peyton Manning only played the first half. He finished the night 14-of-21 passes for 124 yards and 1 interception. At times, Manning did not seem to be on the same page with his receivers. The interception was one example of that. The Broncos were driving and in the redzone. Manning overthrew his receiver in the endzone and it ended in a 49ers interception.

There were other instances primarily in the redzone where the receivers did not run the route the way Manning expected them to. The Broncos offense continued to stall inside the 20 yard-line just as it did in the last preseason game.

Peyton did not look like the player we are used to seeing. It is hard to know whether it is simply a bad preseason game or if Manning is not capable of returning to the player we expect him to be year in and year out.

Manning is currently going between the third and fourth rounds in most standard fantasy drafts. If he returns to form, he could be a steal for your fantasy team. Keep in mind Manning struggled towards the end of last season. It is difficult to know whether Manning can be the player he was at the beginning of last season. 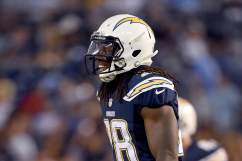