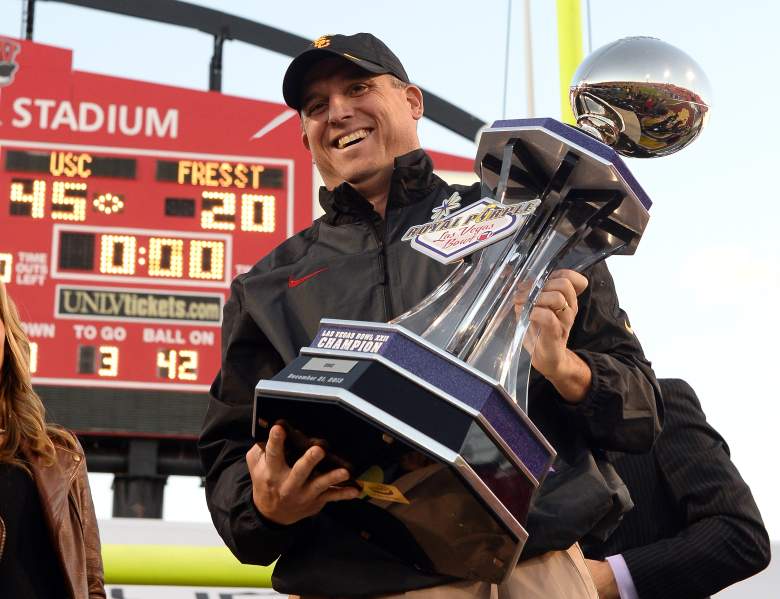 Clay Helton has been named the interim head coach of the USC football team. (Getty)

Clay Helton will be sticking around USC for quite some time. The program announced, on November 30, that it had signed Helton to a multi-year contract after he took over as the team’s interim coach and led the Trojans to a 5-2 mark.

According to a report by ESPN, Helton received a three-year deal and the contract also includes incentives for a two-year option if he reaches certain goals.

“Choosing a coach is an inexact science. In Clay’s case, there is exactness. We have a man with unquestioned integrity,” USC athletic director Pat Haden said in a statement. “He is a fantastic person and he is real. Clay is a leader of young men. He is a terrific communicator. He brings high character, stability, continuity, consistency, toughness and resiliency to our program.”

Here’s what you need to know about Helton:

1. Helton Was the Offensive Coordinator & QB Coach at USC 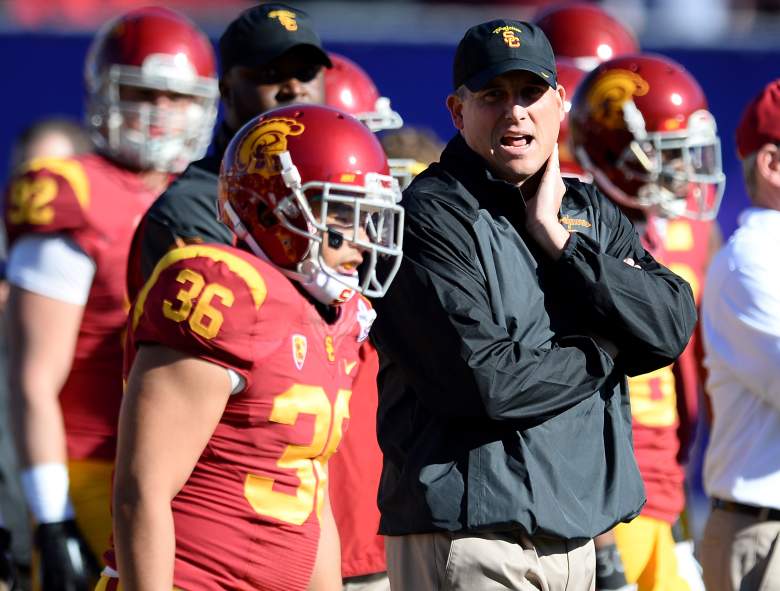 Casey Helton has been with USC for six seasons and has helped produce one of the most explosive offenses in the country. (Getty)

Helton is currently in his sixth season at USC as the team’s quarterbacks coach and his third season as offensive coordinator. Last season Helton helped direct one of the most productive quarterback-led offenses in the country as Cody Kessler completed 69.7 percent of his passes, recorded 39 touchdowns and just five interceptions.

“He’s flying around and every positon group on offense is fired up,” Kessler said of Helton’s sideline presence every week.

This is not Helton’s first time serving as the Trojans interim head coach. He took over the squad in 2013 during the USC coaching carousel.

Lane Kiffin coached the first five games of the season before Ed Orgeron coached the next eight and then subsequently resigned. Helton coached the Trojans during the Las Vegas Bowl notching his first and only victory as a head coach.

A USC player, speaking on terms of anonymity, told The Los Angeles Times on Sunday:

We’ve been in this exact position before with Coach Helton. The locker room mood is shocked, obviously. But the locker room is focused on what we can kind of make this season into. Like the older guys were saying, this season could be a complete disaster, or turn into an epic run like we had in 2013. 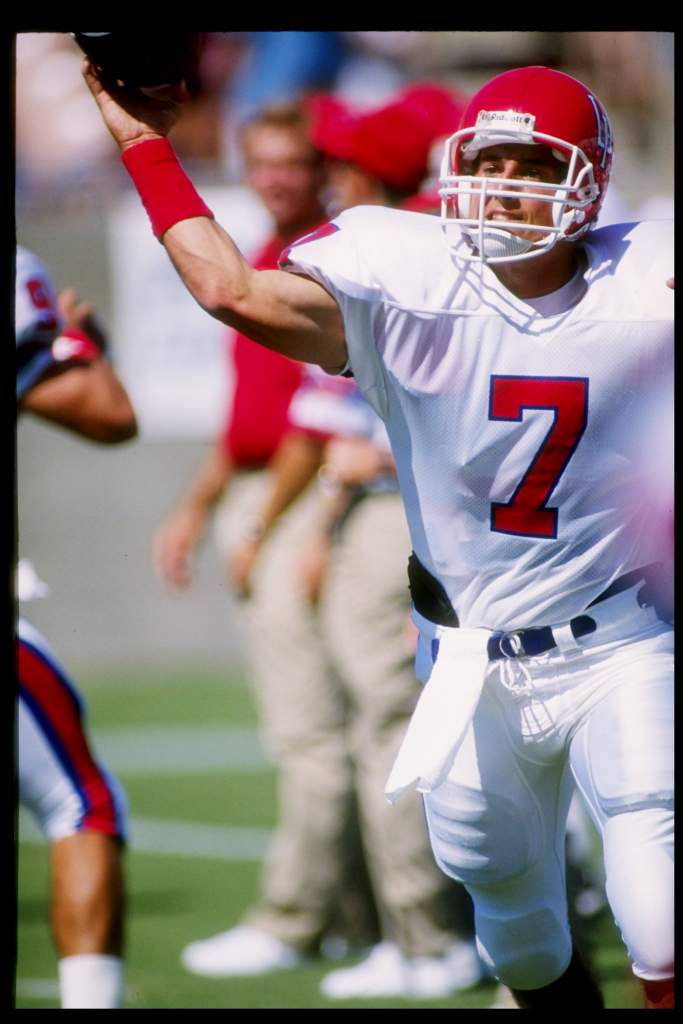 Helton played two seasons of college football at Auburn before transferring to Houston in 1993. (Getty)

There’s a reason Helton is so good at coaching quarterbacks. He used to be one.

Helton played college ball at Auburn and Houston after picking up football during high school in Sugar Land, Texas. It was his knowledge of the game that helped him find success on the field and after college he played two seasons at Auburn under Pat Dye before transferring to Houston after his father was hired as head coach before the 1993 season.

Helton served as the backup QB at Houston for two seasons and graduated with a degree in mathematics and interdisciplinary science. “I was lot better on the chalkboard,” he told The Los Angeles Times, “than I was on the field.

4. His Father, Kim, Coached in the NFL & Canadian Football League 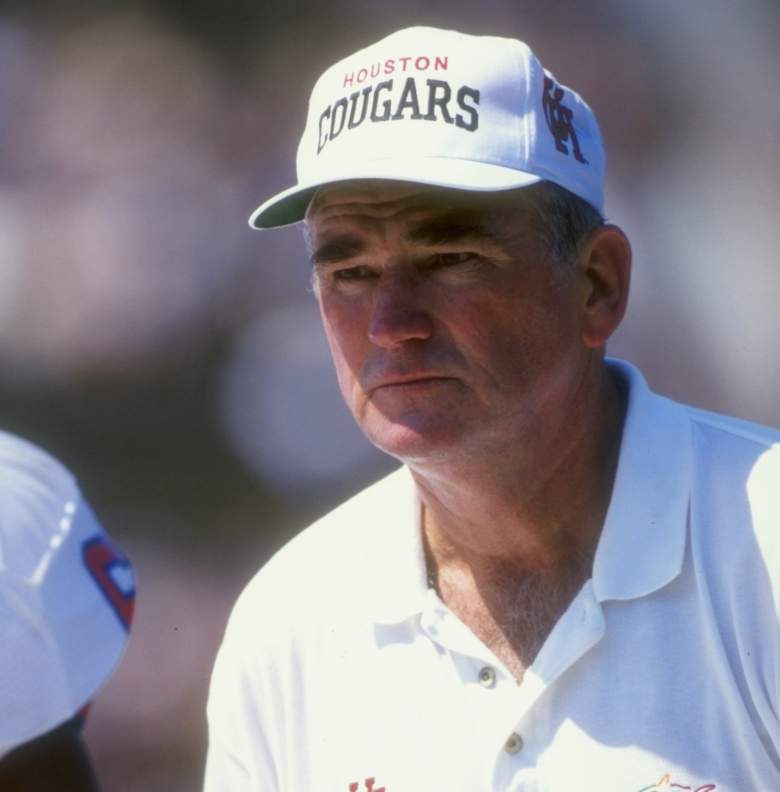 Kim Helton coached at the college, CFL and NFL levels and had a major influence on his son’s sideline style. (Getty)

Football is in Helton’s blood. His father, Kim, has an extensive coaching resume with stints at the college, NFL and CFL levels.

Kim Helton, who played on the offensive line at Florida, coached with the Gators after graduation before moving on the University of Miami and four different NFL squads. He was, of course, also the head coach at the University of Houston where his son played quarterback.

Being around football so often meant Helton grew up around his heroes. He played catch with Jim Kelly and Bernie Kosar and learned his quarterback technique from Warren Moon. Meanwhile, his father taught him how to coach.

Fired up to get back on the field to start the 2015 season. There is no offseason in football! #FightOn #USCSpringBall

Helton began his coaching career at Duke, serving as a graduate assistant in 1995 before taking over as the Blue Devils running back coach. He the returned to his alma mater, Houston, for three seasons, once again working with his father, Kim.

Helton spent a decade on the sidelines with the Tigers as the program’s offensive coordinator and quarterback coach. The 2007 and 2008 offenses were among the best in school history and ranked in the Top 26 nationally in total offense. During his tenure with Memphis, the school appeared in five bowl games:  the 2003 and 2007 New Orleans Bowls, 2004 GMAC Bowl, 2005 Motor City Bowl and 2008 St. Petersburg Bowl.