We are just a day away from arguably the biggest boxing event of the year, as Saul “Canelo” Alvarez is set to defend his new middleweight titles against Amir Khan at the T-Mobile Arena in Las Vegas.

But before the pair of superstars square off inside the ring, they’ll go face-to-face one last time during Friday’s weigh-in.

You can watch a free live stream of the weigh-in via the video at the top of this page. It starts at 5:30 p.m. ET.

Weigh-ins are always entertaining to watch because there’s the chance of fireworks, especially in a battle as hyped as this one. But this is particularly intriguing because one of the main storylines surrounding Canelo vs. Khan has been weight.

Canelo, a former light middleweight champion, made the move up to middleweight for his last fight against Miguel Cotto, winning The Ring, lineal and WBC titles in the process. That was fought at a catchweight of 155 pounds, which will be the case for this bout, as well.

Even at the catchweight, Khan is jumping two classes after most recently fight at weltwerweight. It’s a dangerous proposition, as Canelo has knocked out a lot of opponents who have been naturally bigger than Khan.

In what has been dubbed a battle of speed vs. power, it’ll be intriguing to see what each fighter’s final weight in anticipation of Saturday’s clash. 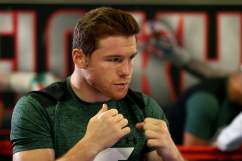 What Date Is the Canelo Alvarez vs. Amir Khan Fight?