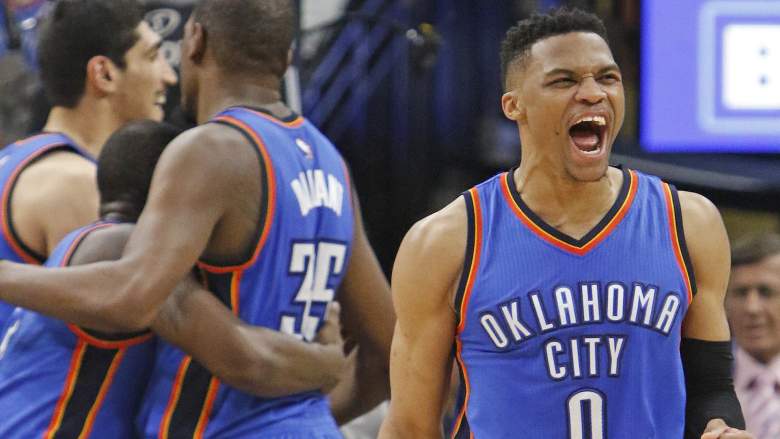 Tied at one game apiece in the Western Conference semifinals, the San Antonio Spurs and Oklahoma City Thunder head to Oklahoma for Game 3 on Friday night.

The Thunder bounced back from the Spurs’ Game 1 drubbing in impressive fashion in Game 2, squeaking out an entertaining 98-97 victory to hand the Spurs just their second home defeat of the season.

OKC has been similarly dominant in its own building, winning eight of its last nine overall and 11 of 13 against the Spurs. The Thunder won both home games against San Antonio this season by a combined 25 points.

Still, if there’s any team to break that trend, it’s the Spurs, who boast more postseason experience and better coaching than anyone in the league. After a thrilling and albeit controversial Game 2, this should be a fine encore.

Here’s everything you need to know to watch Game 3:

If you don’t have access to a cable or satellite log-in, you can watch the game through Sling TV, an online streaming service that provides access to select channels for a monthly fee. The service’s Best of Live TV package, which includes ESPN, costs $20 a month. But if you’re looking for a way to watch the game for free, you can do so with Sling’s free 7-day trial. Click here to sign up for Sling TV. You’ll need to enter your credit card information when signing up, but if you cancel your subscription before the trial period ends, you will not be charged.

If you do have access to a cable or satellite log-in, you can simply watch the game via WatchESPN.com. You’ll need to enter your cable log-in and password to watch the stream.

Watch Thunder vs. Spurs Game 3 on Mobile or Other Devices

If you have a Sling TV subscription, you can watch the game on the Sling app, which you can download for free in the App store or the Google Play store. There’s also a Sling app for Roku, Chromecast, Nexus player, ZTE and XBox One.

You can also watch the game via the WatchESPN app, which you can download for free in the App Store, the Google Play store, the Amazon App store, the Windows Store or for Xbox One. You’ll need either a Sling TV log-in or a cable log-in to watch the stream.

Read More
Basketball, NBA, Oklahoma City Thunder, San Antonio Spurs
The Spurs and Thunder meet for Game 3 of the Western Conference semifinals. Find out when and where to watch the action.