It’s only a couple of days until Anthony Joshua and Wladimir Klitschko clash in what is easily one of the most anticipated fights of the year, but fans don’t have to wait to watch the bruising heavyweights in action.

Joshua and Klitschko will have open workouts on Wednesday, April 26, and you can watch a live stream of those workouts at the top of this page starting at 4:15 p.m. ET (9:15 p.m. in the UK).

This fight is likely to provide fireworks in a way only a heavyweight bout can.

Klitschko (64-4 with 53 knockouts) is one of the best to ever step inside the ring. He transcended the division for a decade, and after a surprising unanimous decision loss to Tyson Fury in November of 2015, he’s ready to return to the top.

Watch some of the best moments in the career of ring legend @Klitschko ahead of #JoshuaKlitschko, Saturday at 11pm on @HBO. pic.twitter.com/02Z29oToL6

Joshua, meanwhile, has seen 18 opponents and sent them all packing via knockout, displaying breathtaking power in the process. Now, he gets a chance to prove he can do it against the very best.

“It is the start of a legacy,” said Joshua. “I think if Wlad wins, he will say to himself ‘I’m still the big bro’ but if he loses he will realize that the torch is changing hands. It is a completely different era. This is the start of, God willing – win, a new legacy, a new division of new up-and-coming champions.”

The fight is scheduled to start Saturday night at about 5 p.m. ET (10 p.m. in the UK) and will be broadcast live on Showtime and on a tape delay (10:45 p.m. ET) on HBO (Sky Sports Box Office in the UK). You can read here for more information about when and where to watch. 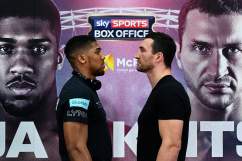