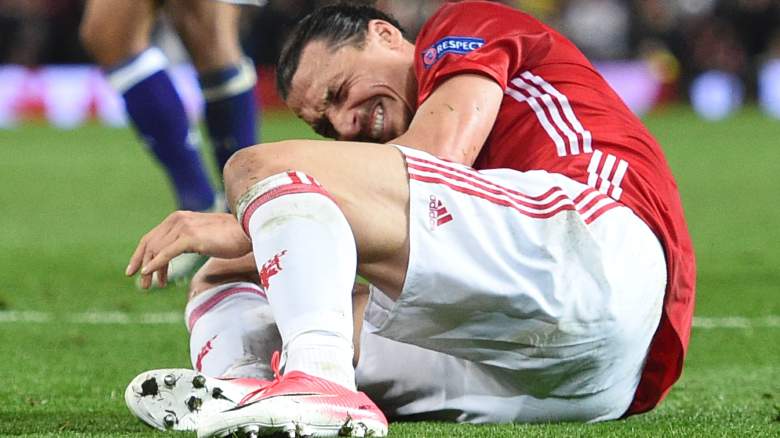 Manchester United was dealt a potentially devastating blow on Thursday, when star striker Zlatan Ibrahimovic suffered an ugly-looking knee injury during the second leg of his squad’s Europa League quarterfinal matchup against Anderlecht.

With the score tied on aggregate in the final seconds of the second half, the 35-year-old went up for header and appeared to hyper-extend his knee upon returning the ground. Here’s video of the incident:

Ibrahimovic, who was in clear pain after suffering the injury, was stretchered off the field and replaced by Anthony Martial, marking the first time he has been substituted out during his time with The Red Devils.

This comes at a time when the Swedish star’s future at Old Trafford was already uncertain.

“I don’t know how long I have left. Rashford, Lingard have long careers in front of them,” said Ibrahimovic, who will reportedly receive a one-year contract extension offer from United. “This season has been great but I’m always comparing my seasons to the seasons I’ve had. I’m happy I chose this club because I think this is the biggest club in Manchester, in England and one of the biggest in the world. I have nothing else to prove, everything has been said.”

It’s certainly never a good time to lose one of the most dangerous goal-scorers in the world, but this is difficult timing for Manchester United, as they chase Liverpool and Manchester City for a Top 4 spot in the EPL. Their next match is Sunday against Burnley, while a Manchester Derby looms for next Thursday.