With the completion of the 2017 Dell Technologies Championship, the players for USA’s Presidents Cup team have been set. The 2017 Presidents Cup will be played at Liberty National Golf Club in Jersey City, New Jersey, from September 28 to October 1.

The United States team features the 10 players who earned the most official FedExCup points from the 2015 BMW Championship through the 2017 Dell Technologies Championship. Points earned during the 2017 calendar year counted double. On Sept. 6, captain Steve Stricker selected Phil Mickelson and Charley Hoffman to finish the roster.

.@Kevin_Chappell has secured the 10th and final spot on the U.S. @PresidentsCup team. 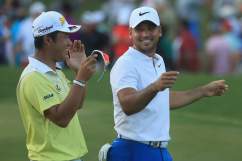