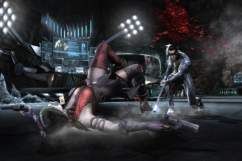 Batman’s nemesis The Joker sets his deadly sights on Metropolis’ savior Superman this time around. In a separate DC universe, The Joker ends up tricking Superman into killing Lois Lane along with her and Superman’s unborn child. Lois’ death sets off a nuclear bomb that detonates and lays waste to Metropolis, killing millions.

In a fit of rage, Superman kills The Joker right in front of Batman. Superman then proceeds to start a new world order called “The Regime” – a mix of superheroes and super villain’s that abide by Superman’s tyrannical rule. The group of superheroes and super villains that are in opposition to Superman’s new found rule are “The Insurgency,” who transport their superhero counterparts from another universe to their’s to combat “The Regime.”

The game’s story mode is beyond epic. It’s reminiscent of the way the last Mortal Kombat’s story campaign turned out (play as certain characters for a whole chapter, face off with different opponents, watch in-game cutscenes etc.). What’s different about this game’s story mode though is the addition of minigames meant to break up the many fights.

At one point, you’ll use Batman and throw Batarangs at Lex Luthor as he lumbers towards you in his super suit. And then there’s the epic struggle (that you actually get to play) between Green Lantern and Sinestro that involves plenty of green and yellow ring constructs. In a cool nod to MK’s “Test Your Might” minigames, this battle utilizes that mingigame’s likenesses through its button mashing mechanic and strength bar graphics display.

Fighting games’ stories are usually hollow or unimportant, but Injustice’s is one of the finer points of the game.

Injustice: Gods Among Us is one of the few fighting games that gamers will get to play in 2013. Thankfully, it’s one of the best fighters I’ve played in quite some time. The game’s roster is nearly flawless, as it compiles DC’s most familiar faces and some of the more obscure comic book characters from the comic book staple.

Injustice is the type of fighting game that’s easy to play, but harder to master. Luckily, there’s a bunch of modes and helpful aids that welcome first time players into the fold. As soon as you look to enter your first 1 vs. 1 battle, Tutorial Mode pops up to show you the basics and more advanced aspects of the game. After you’re done there, the game continues to craft you into a worthy competitor.

The moves list for each character can be accessed in the middle of a fight. For hardcore fighting game players, these familiar options (start up frames, recovery frames. hit advantage, and block advantage) are displayed for most of the moves. And one option (that should be in all fighting games from now on, IMO) even lets you tag moves that can be shown under your life bar during the fight. No need to press start every time you forget how to activate Doomsday’s airborne elbow drop.

The game features a wide variety of modes and content. There’s the lengthy story mode, of course. As for those who wish to stay offline, there’s single player battles against the CPU and a ladder mode that’s clearly inspired by MK. Injustice up’s the ante for this mode by offering different types of ladder rotations, such as Heroes Only or Poisoned mode (face off against 10 random opponents all while your health is steadily decreasing).

Multiplayer mode offers your usual offline two-player battles, but there’s also online options (ranked match, player match, private match). You have your usual 1v1, but anyone familiar with MK’s online offerings will rejoice at the addition of the King of the Hill and Survivor modes. My experience with the online portion of the game was near flawless, as I was able to find matches without waiting too long. The net code for this game is way better than MK’s, in my opinion.

Another awesome part of the game is the extra S.T.A.R. Labs missions, which entail the roster involving themselves in fights or fun minigames. One minute you’re learning Superman’s moveset and the next minute you’re playing a game of Asteroids with Black Adam and his lightning strikes. On top of all this content, you’ll gather experience for everything you do. That experience is reflected by your “Hero Card,” which displays a cool mix of a custom background, icon, and portrait.

As you gain EXP, you’ll also get a taste of the game’s huge unlockables. There’s a vast collection of new costumes, character models, concept art, music etc. to compile. Trust me when I tell you – you’ll be playing this game for it’s unlockables for a while.

The graphics get the job done as well. The multi-tiered arenas all look lovingly detailed, thanks to their awesome easter eggs (Dr. Fate’s costume, Martian Manhunter brooding in the background during a fight etc.) and working bells/whistles. The environment can be used in various ways (usable items, hit your opponent into the background, beat them with no mercy in a moving elevator etc.) against your opponent, which prove to make every fight an epic encounter.

As for the game’s roster, everyone looks loyal to their comic book profiles. New armor-esque costumes are lovingly detailed and look pretty sweet on characters like The Flash. Even though Injustice holds come visual comparisons to the last MK, this fighter still has a graphical identity of its own.

Even though Injustice is an incredible fighter, there are still some gripes I have with the total product. Injustice retains the stiff character animations from MK that may put off some from giving this fighter a chance. The environmental attacks take off far too much life and feel like the unfair deciding factor in most fights (this isn’t a major gripe though since you have the option of turning off environmental interactions).

And after a while, the game’s character intro’s, outro’s, and super moves get old once you’ve sat through them a million times. And finally, the dial-a-combo nature of MK may keep haters of this particular style away. If you don’t like MK, then I’m quite sure you won’t enjoy Injustice: Gods Among Us.

Injustice: Gods Among Us is one of the best fighting games to hit consoles in a while. Ed Boon and his top-notch team of fighting game devs at NetherRealm Studios have put together an excellent fantasy superhero/super villain throwdown. Comic book nerds/gamers/fighting game enthusiasts will certainly enjoy this fighter. The wealth of content, fast-paced gameplay, great roster, and action-packed battles will pull you in for several hours of addictive play sessions.

Injustice: Gods Among Us hits stores on April 16 and is available for the Xbox 360, PS3, and Wii U. An iOS version of the game is also available, which can unlock further content that can be accessed on the console release.

Injustice is a great fighting game effort. Even with the stiff animations, overpowered environmental attacks, and tiresome elements, this fighter is still a major player in the fighting game genre. These minor problems don’t do too much to hold this fighter from achieving greatness. Do yourself a favor and cop this super fighter. 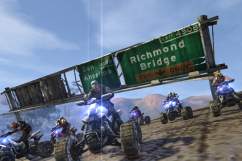 REVIEW: ‘Defiance’ Fumbles its Attempt at a 3rd Person Shooter/MMO