The Klombos may have only been in Fortnite for about a week, but players are already coming with creative ways to ulilize them, and some have even found out how to win a game with them.

For the most part, you’ll want to leave these dinosaurs alone as they can reward you with some valuable loot and can become very dangerous when provoked. For added incentive, you might want to keep them around because Epic is already making threats if you kill them.

While you would normally want to avoid fighting one, they can actually be valuable assets in a fight, like we saw from this player who managed to lock down a Victory Royale without having to eliminate his enemy himself. Let’s take a look.

It definitely wasn’t necessary to win, but Reddit user Nimbl_ angered the Klombo and brought it into the final circle to get a win.

The Klombo broke down all of the builds and forced both players onto the ground for the rapidly closing circle, but instead of going after who shot it in the first place, the dinosaur instead attacked and eliminated the opponent.

While Nimbl_ was given the Victory Royale, he made sure to give all of the praise to the Klombo by pointing at it after securing the win. Most circles don’t close next to a Klombo like we saw here, but you can see that if they do, it might be worth bringing it in on the fun. You just witnessed the best case scenario, so try not to be on the other end of it.

Some players have spoken up about having the option to lead a Klombo with a new item, but it looks like this might be the next best thing if that option never becomes available. 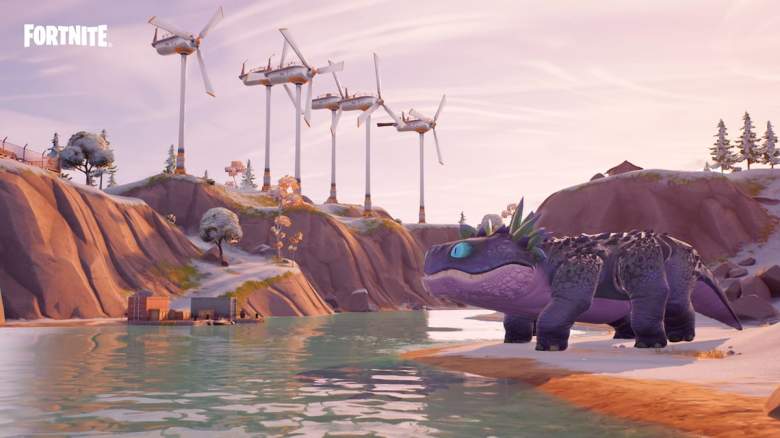 The Klombo has been a cool addition to Fortnite because you can use them in a variety of ways. As we saw, you can even get a win with them, but that’s definitely not going to be the norm.

Instead you might want to use these dinos for nice rotations and a way to get some loot if you come across them.

Throughout Chapter 2, we saw Epic Games lean heavily into the addition of wildlife in Fortnite, and it looks like they don’t plan on slowing down in Chapter 3. While Raptors, Boars and the like have never really come to the level of Klombo, it always seemed like it’d be building to something like this.

We’re sure many players are glad to see the Raptors aren’t around anymore because those things would just hunt you down if you didn’t eliminate them, and they would become a real pest in a fight. The Klombos don’t attack unless attacked, so you can casually be having a build fight next to them and they won’t care unless a stray bullet finds a way to hit them. Once that happens, you’ll be in big trouble.

Loading more stories
wpDiscuz
0
0
Would love your thoughts, please comment.x
()
x
| Reply
This player use the Klombo for a win in Fortnite.