For those of you who may not know, Deadpool is the king of comic book comedy. He can’t help but spout off a million and one one liners as he runs into harrowing situations with his swords and guns in tow. Deadpool’s ego has grown to epic proportions, thanks to the fact that he gets to be the main man in a video game named after him.

Marvel’s number one mercenary has been nagging the developers of his game (High Moon Studios) for far too long, but his continuous prodding (and violent means of persuasion) finally gets the studio to give him the okay. What follows is a plot that’s pure nonsense and nonstop humor. High Moon Studio’s script isn’t to Deadpool’s liking, so he ends up creating his own plot device.

You’ll get a good sense of Deadpool’s 4th wall breaking dynamic, as he’ll berate High Moon Studios, his own voice actor (Nolan North) and the person holding the controller. Marvel fans will most certainly enjoy the character cameos from Wolverine, Cable, Psylocke etc. As you move along through the game’s campaign, you’ll come across moments that enable you to learn more about these famous faces and their origins.

Deadpool’s only concern during his explosive journey is to get even with Mister Sinister for screwing up one of his contracted kill jobs. You won’t have to pay too much attention to the overall plot since you’ll be too busy laughing at the madness that is Deadpool’s inner dialogue and crazy antics.

The game looks good enough. They’re nothing special to look at, but they’re not damaging to the eyes either. Each locale focuses on a generic stage type (underground sewers, big office building, destroyed island etc.), so you won’t be too invested in wherever you’re at. As for the game’s audio, its finest attribute is Deadpool himself. His mouth runs a mile a minute as he taunts his enemies, questions his wardrobe before a meeting with a female fan fan and berates the player for not using the momentum meter.

At times, Deadpool’s random commentary can get a tad bit annoying, though (his male genitalia wisecracks do get old after a while…). The music that pumps out during the hack ‘n slash encounters are your usual generic rock ‘n roll numbers. You probably won’t even hear much of it, thanks to Deadpool’s incessant blabbering (which is a good and bad thing, depending on the player).

Deadpool is a mercenary who’s packed to the brim with dual katanas, pistols, shotguns, grenades and whatever else you end up buying. The majority of your play time with this game will be spent mowing down mutant clones. You’ll deal damage by mixing up light and heavy attacks along with your arsenal of guns. The combat is solid, but the loose camera tends to complicate enemy encounters. It’s unwieldy at times, which makes it get stuck behind environmental obstacles and take your view off of the enemies you’re trying to butcher.

Thankfully, the combat is fun enough to take your focus off of the uncooperative camera (sometimes). Enemies warn you of their upcoming attacks when notifiers appear over their head (Batman: Arkham Asylum/City style), so you’ll be able to mix up your melee mashing with counters. Deadpool’s attacks power up a combo meter that’s prone to head into the hundreds if you’re fast enough with your kills.

The gunplay is your usual third-person shooting affair. You’ll aim with the left trigger and unload with the right trigger (the lock-on option should help you down more annoying airborne enemies). Speaking of the enemies, there’s a solid mix of them. You’ll run into nameless grunts, overweight mutant clones and enormous soldiers with huge guns to match. Once you’ve seen one though, you’ve seen ’em all (they’re clones, after all).

Even though the combat can be a fun distraction, the often loose and unpolished nature of it all holds it back from greatness. Mowing down enemies with your melee weapons can turn into a button mashing affair, plus targeting enemies with your guns doesn’t feel as tight as other third-person shooters. Deadpool’s health can regenerate over time, but later levels will cause you to die quickly thanks to annoying enemies that disrupt you during crowded encounters.

You’ll have an awesome time cutting down a bunch of clones…until two fat, purple blobs disrupt your combo meter with cheap attacks. Deadpool has a ton of attack options available to him (which you can purchase with the in-game currency), so at least you won’t become entirely bored when you start fighting. The counter/transport system keeps the game from becoming a mindless third-person brawler.

Deadpool’s quality goes up a notch because of how hilarious it can be. The first level is bound to get a few laughs out of anyone playing it since there’s plenty of interactive moments that are littered throughout each level. There are several sequences that are strewn throughout the game (Deadpool’s meetings with Cable and his attempts at waking Wolverine up are pure hilarity!), which makes the rest of the game more bearable. You’ll love the crazy enemy encounters, fast paced swordplay/gunplay and the game’s constant hilarity. You just won’t enjoy it to the fullest because of the screwy camera, loose combat feel and annoying fat/airborne baddies.

Deadpool isn’t exactly the summer gaming breakout hit some fans imagined it would be. It’s still a solid shoot ’em up/melee-focused good time that’s strengthened by the trademark humor of the game’s star. You’ll kill a few hours with this action game and actually enjoy most of it. It’s just the nagging issues that make Deadpool feel a bit unpolished and unruly. This gore fest is good, just not THAT good… 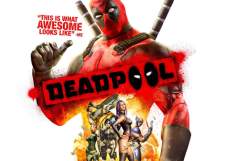