During Sony’s Gamescom 2013 livestream event, the biggest news of all came to light (FINALLY!) – the official release date and launch schedule for the PS4.

Here’s some extra info that we derived from Sony’s PS4/PS3/PS Vita press conference:

– The new free-to-play experience, LittleBigPlanet Hub, was announced for PS3. It’s releasing later in 2013.
– Borderlands 2 is coming to the PS Vita.
– Gran Turismo 6 is coming to the PS3 on December 6, 2013.
– The PS Vita will now cost $200/200 Euros. The price of the Vita memory cards will also decrease.
– Gamers who purchase Battlefield 4, Assassin’s Creed 4: Black Flag, Call of Duty: Ghosts or Watch Dogs on the PS3 will be able to purchase each game’s digital counterpart at a discount for the PS4. Electronic Arts, Activision and Warner Bros. are the companies that were named as a part of this program (so far…).
– Color variations (Magma Red, Wave Blue) will be available for #59.99 by the end of 2013.
– According to IGN.com, Sony’s augmented reality feature (Playroom) will come pre-installed on every PS4:

During their Gamescom Briefing, Sony reminded the audience that their augmented reality experiment, The Playroom, will be pre-installed on every PS4. Playroom was announced at E3 2013 and uses AR technology to simulate a Wii Sports style experience using the DualShock 4’s light bar and other system functions. The PlayStation 4 Eye camera, however, is not bundled with every system.

– And according to GameInformer.com, Sony and Twitch have a new partnership that will be showcased on the PS4:

– A bunch of new games were announced. Check out the link below for the PS4 exclusive games list.

– Here’s all the digital titles that will be available for the PS4 in 2013: 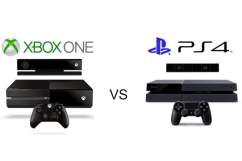