Terraria is the type of game that tests the patience and creative abilities of casual and hardcore gamers. The majority of this genre-packed game focuses on building up your own items, growing an active community and fending off the hideous baddies that make their presence known in the evening.

Everything this game throws at players can be daunting at times, plus the release of an iOS versions means there’s new players who might be struggling with the game. We’ve played the console/PC editions of the game and we’ve come away with a few tips that apply to the new mobile version, too.

Here are 10 awesome Terraria tips and cheats that will help you live and prosper in the 2D sprite world:

1. Acquire Some Wood As Soon As You Enter The World of Terraria

As soon as your character lands on solid ground, your first order of business should be cutting down some trees with your axe and nabbing some wood – and that’s one of the most essential Terraria tips we can give you. Tray and chop away at the exact base of the tree so you don’t end up producing any stumps, too. The wood you get from chopping down some trees will go towards you building up your home base/shelter. But first, you should use ten pieces of wood to create a workbench. That workbench will let you create much sturdier items. This workbench will end up becoming a huge part of your home base.

2. Here’s How You Should Go About Crafting Your Own Home

PocketGamer.Co.UK knows just what it takes to build up your very own house:

Now, you need to build a home. Use your pickaxe to level out some ground, and get building. A home needs a background wall (so craft lots of wood wall blocks), two walls (wood or dirt will do), and a ceiling. Now you’ll be safe from monsters while stood inside. Dig out the bottom three tiles on one wall and place a door. Now you have easy access in and out. You should probably build your first home close to your original spawn point. Why? Because until you start building beds, you’ll always return to the same spawn spot when you die. Watch out, though: your guide will wander about near the spawn point, carelessly opening doors and letting monsters inside your new house.

Your home is going to need some type of light source during the evening time. It’s best to use your pickaxe (or sword if you got one) to kill slime monsters. The gel they release when they’re killed can be used in conjunction with wood to produce torches. Place these torches around your home ASAP.

4. Produce A Furnace for Your Home

Your home also needs another essential item – a furnace. In order to produce a furnace, you’ll need to obtain some stones. Stones can usually can be found on the ground surface, so use your pickaxe to bring them out. Once you get 20 stone blocks, go back to your workbench and make sure you build that furnace! The furnace can then be used to make copper and iron, which is used when it comes to crafting stronger items.

PocketGamer.Co.UK also posted some tips on picking up some iron:

Speaking of iron, it’s now your new target. This stuff will enable you to make more powerful versions of all your basic copper tools. It can be hard to distinguish iron from stone. Iron looks slightly darker than stone, has a subtle brown tint, and sparkles in sunlight. You might need to dig a little underground to find a rich iron ore vein. Now, smelt some iron bars in your furnace, and use those bars to build an anvil in your house. Use the anvil to make a new pickaxe and sword. A broadsword, that is. Shortswords are tricky to wield, especially on iOS.

6. Use Flail Weapons for Headshots

Flail weapons, such as a boomerang, can be used to hit multiple enemies since it can be thrown. Use these flail weapons to attack the heads of various enemies. The weapons will then attack any enemies in the vicinity, then return from a few more hits when those types of weapons come back.

7. Here’s How to Defeat the Eye of Cthulhu

The video you’ll see above should help you become the victor during your first encounter with the massive Eye of Cthulhu, one of the toughest encounters in the game.

8. Use Your Block Setup to Fend Off Zombies

The zombies that try to attack your home are annoying as hell, aren’t they? If you want to cheat a lil’ bit and take them out without getting touched, do this – remember that zombies are measured at 2 x 3 blocks. Place an extra block on the floor near your door so you have a step up above the oncoming zombie horde. This extra block will let you hack away at zombies from the safety of that extra block. Those zombies won’t come inside anytime soon, which is why this is one of the most essential Terraria cheats we have here.

9. Trap Those Disgusting Monsters in a Hole During A Blood Moon and a Goblin Invasion

The Wiki page for Terraria notes an important tip when it comes to facing off with monsters during certain periods of the game:

Trapping monsters in a hole can be very useful during a Blood Moon and a Goblin Invasion. An easy way to do this is by digging a hole deeper than you can jump in depth and two blocks wide. After that, you might consider putting a roof over your hole so that any mobs that are walking toward it can’t jump over it. They will fall into the hole and await their demise of endless Spikey Balls.

10. There’s A Way to Produce Infinite Money and Items

IGN.com posted up some details on a cheat that can help you get your hands on infinite money/items:

Open 2 copies of Terraria. Log into a world with the character that has the items you want to duplicate. If they are in a chest, get them from the chest and save and exit, then log back into the same world. Login as the SAME character on a different world. On the first character, put whatever you want into a chest, then save and exit. On the second character, save and exit from that world, then log into the other world that has the item in the chest and grab the item. Now you should have the item in your inventory, and a copy would be in the chest. you can grab that copy and now you have 2. This is useful if you want multiple grappling hooks for friends or even gold/armor. You can repeat but remember to save and exit, THEN try it again as it wot work in one long run.

If you have any extra tips and cheats you’d like to contribute to fellow Terraria players, throw them in the comments section! 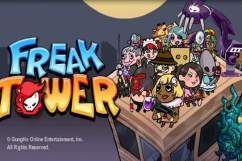 Freak Tower: Top 10 Tips and Cheats You Need to Know