It’s amazing how fast Flappy Bird got replaced. Now the iTunes App Store has a new king at the top of the free game charts – Splashy Fish!

Instead of lying through the air and dodging massive green pipes, you now have to focus on making a fish bounce through underwater obstacles. It’s pretty much the same concept, but its seemingly a tad bit better. The graphics look a bit more refined, if you ask us. But that’s besides the point! You came here for advice, right?

These top 10 tips/tricks/cheats will make you a master of the sea as you take a seat and play Splashy Fish!

1. Keep Your Eyes Peeled on Those Low Columns

Your eyes should always be focused on the bottom column. When your close enough to any of those bottom obstacles, the key to getting past them is to tap exactly at that moment. You won’t have much a of a hard time beating your own score if your just remember to float up when your fish is a wee bit too close to the lowest column.

Head to the next page to learn about becoming a tapping master!

2. Two or Three Taps Should Do The Trick

Short and quick taps are the name of the game here. You shouldn’t have to tap more than twice, but there will come moments where you will tap three times if those columns are low enough. But for the most part, master your tapping rhythm and narrow it down to two taps maximum. That should get you much farther and get your high score even higher.

Head to the next page to learn how many tries you should play before taking a break!

You’ll find yourself dying here…a lot. Which is something you should be used to by now if you’ve played the many games like this one. You should play at a maximum of five different tries per game. There’s really no need to further frustrate yourself if you’ve died for the fifth time. Take this time to turn the game off, get your fingers ready for round two and prepare to score much better than before. Five tries, folks. Playing this game in moderation will get you very far.

Head to the next page learn where you should keep your fish at the beginning of the game!

4. Keep Your Fish Near The Center at The Start of the Game

Shout out to all the noobs still playing Flappy Bird…#SplashyFish pic.twitter.com/ikqq8z6ozf

The columns are randomly placed at the start of every level so there’s really no way to remember which column will end up. At the start of every game, try to keep your fish near the center of the screen. This way, you’ll have a 50/50 chance to hopping between the spaces of a high column or dropping low enough to clear a low column.

Head to the next page hear about where your hand placement should be!

5. Keep Your Fingers Near The Bottom of the Screen

It doesn’t matter which hand you wish to play this game with. Just make sure your finger taps are aimed at the bottom of the screen. You won’t obstruct the view of whatever you see coming up. Your current score and high score lies at the top of the screen, so you’ll have no problem just tapping the bottom. 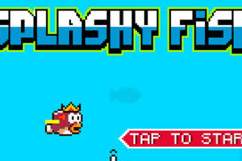 Head to the next page to learn about the best mood needed to help you with this game!

The key to getting the high score you want is by staying calm. This game is just as difficult as Flappy Bird and the rest of the game like it that currently flood the mobile apps market. Don’t let your anger keep you from getting 20 points and a new piece of clothing for your fish. This is the type of game that require your full, undivided attention, so play it in a quiet locale that will allow you to chill out and get your Splashy Fish on.

Head to the next page to hear some advice on what your eyes SHOULDN’T be focused on!

7. Don’t Look At Your Score During A Playthrough

Don’t focus so much on what your current score is. Your eyes should only be glued to the position of your fish and those oncoming obstacles. You’ll find that you’ll do much better if don’t waste a split second to see how good you’re doing. You’ll feel much better once you do die and see that your score increased by enough to grant you a new prize. When you take a spill, that’s the only moment where you should check out your points tally.

Head to the next page to hear how practice will make a Splashy Fish master!

Practice makes perfect, so make sure you head into this game with the mindset of improving through repeated failure. It may take 100 or so tries before you actually attain 50 points in one shot. With this knowledge in hand, you’ll have the patience needed to train yourself into a Splashy Fish master!

Head to the next page to learn about the 8-bit audio trick!

I missed out on Flappy Bird so I got Splashy Fish. pic.twitter.com/I7kk2lSIcU

Wanna hear some old school 8-bit chiptune audio? At the main menu screen, just make sure you tap with three fingers instead of one to officially start the game up. VOILA!

Head to the next page to learn about all the cool items you can unlock!

Always keep a close eye on how many underwater obstacles you end up clearing. For every 10 points you earn, you’ll level up and earn these new cosmetic add-on’s for your loyal fish:

If you have any extra tips and cheats you’d like to contribute to fellow Splashy Fish players, throw them in the comments section!