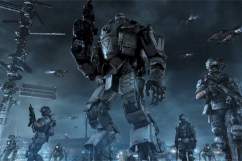 The Xbox One needs a next-gen killer app that warrants the early purchase of the console. The developers at Respawn Entertainment dedicated hours to producing the type of game that fits that description – the slick and chaotic first-person shooter known as Titanfall.

There’s tons of information regarding this futuristic FPS and what went into making the game a reality. Before the release date hits, make sure you have all the facts needed to get you up-to-speed on this next-gen Microsoft exclusive.

Here’s everything you need to know about Titanfall!

1. Titanfall Was Developed by Some of the Developers Behind the Call of Duty Franchise

Respawn Entertainment’s origins are steeped in controversy. The co-founders of Infinity Ward, Jason West and Vince Zampella, and their team members helped develop several notable games in the Call of Duty series for Activision. The relationship between both companies soured when Activision fired both co-founders back in March 2010. Activision’s reasoning for letting West and Zampella go revolved around both men’s perceived “breaches of contract and insubordination.” Both Activision and the former Infinity Ward heads faced off with each other in court and battled in a series of several lawsuits.

Later on in 2010, West and Zampella created a new video game development company called Respawn Entertainment. Several of the staff members who worked for Infinity Ward migrated over to Respawn. The development team eventually grew to a 65-person team. The team’s first project was revealed to be a sci-fi shooter that was to be published by Electronic Arts.

That game was finally revealed to be Titanfall.

Titanfall’s focus is strictly focused on online multiplayer. There will be single-player elements included in the multiplayer, such as a storyline, dialogue between the characters and non-playable bots. 12 human players will be able to hop into the game’s many maps as several different pilot classes. The two sides that the 12 players are split up into are the IMC and the Militia. The overall map count is said to be 15, while the weapons count clocks in at 33. Splitscreen support will be one of the more unique features being added to multiplayer for two local players playing online.

3. The Game’s Main Hooks are the Parkour Elements and Titan’s

What sets this first-person shooter apart from other games in the genre is its parkour movement system and the addition of massive Titans. Each of the controllable pilots have the ability to stay mobile by double-jumping, running on the sides of buildings, climbing onto Titans and flying into buildings.

Along with the speedy and floaty mobility of the pilots, players can take control of their own Titan. The Titan classes revealed includes the agile Atlas, the larger than normal Ogre and the fast-moving Stryder. Once a player nabs enough points and kills enough people during a game, the countdown timer is reduced for an incoming Titan. Once the Titan is deployed, a 30-second long force field wraps around the Titan for protection from rival pilots/Titans. Players can then hop into their Titan and run around the battlefield battling other pilots and Titans.

4. There’s Going to be a Campaign Focused Multiplayer Mode

A multiplayer-focused campaign mode will be present in Titanfall. This mode will feature additional plot elements at the beginning and conclusion of the missions that players will participate in. This mode is said to be being included in the game as a nice introduction point for first-person shooter newbies and first-timers to the game itself. The game’s Wikipedia page spoke in great length about the main storyline that makes up the conflict in Titanfall:

The Militia are the civilian military of the Frontier and the resistance against IMC use of colony resources. Their most important members include Titan War veteran and former mutiny leader MacAllan, intel specialist and engineer Bish, and Marauder Corps leader Sarah.[15] The corporate conglomerate IMC specializes in natural resource extraction, and came to the resource-rich Frontier for business. Their major players are Frontier operations commander-in-chief Vice Admiral Graves, intel specialist Blisk, and artificial intelligence companion Spyglass.

5. The Game’s other Maps Were Apparently Found in the Beta

The game maps that have been revealed in the game thus far include Angel City and Fracture. A NeoGAF user named RazorUK mined the beta for information on the game’s full assets. Here are the names of the other maps that RazorUK discovered:

– Smugglers Cove: Part arms-bazaar and part pirate enclave, Smuggler’s Cove is famous for its selection of mercenaries and black-market kits.
– Boneyard: Extensive IMC research on wildlife repulsor technology was once conducted at this facility.
– Relic: Parts salvaged from this old IMC shipwreck are sent into the valley below for further processing.
– Rise: Militia special forces set up a Long-Range Desert Patrol outpost in an abandoned IMC reservoir.
– Overlook
– Outpost 207: Orbital defense cannons stationed at high altitude defend against the incursion of hostile capital ships.
– Airbase: IMC Airbase Sierra is defended against local wildlife by the latest generation of repulsor tower technology.
– Lagoon: An IMC carrier makes an emergency landing on a small fishing village in the Freeport system.
– Colony: IMC and Militia forces clash in the close-quarters of an uncharted rural colony.
– Demeter: Demeter is a critical fueling station for IMC forces making the jump into the Frontier.
– Nexus: IMC forces move in to pacify a backwater agricultural outpost suspected of harboring Militia personnel.
– Corporate: Applied Robotics labs on the Frontier such as this one, developed the IMC’s Spectre automated infantry unit.
– Training Ground: IMC Pilot training programs conducted here have a 98 percent fatality rate. Only the strong survive