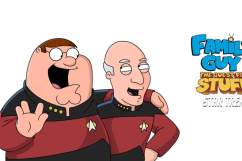 Are you familiar with The Simpsons: Tapped Out? It’s a pretty well known mobile city simulator that gives mobile gamers the chance to build and maintain their own version of Springfield.

The Simpsons animated rivals come in the form of Family Guy, which means the competition between both comedy franchises leads to completing pieces of memorabilia. On he mobile games front, Family Guy threw its name into the hat as far as mobile city simulation video games are concerned – Family Guy: The Quest for Stuff. There’s a lot to see, build and laugh at as you take the reigns of running your own version of Quahog.

There’s a lot to rebuild after the great battle between Peter and that damned giant chicken, so here’s the top 10 tips/tricks/cheats that will make your neighborhood freakin’ epic once again!

• Clams and coins make up the major currency items you’ll need in order to rebuild your quaint little town of Quahog. Coins are pretty easy to acquire, but clams are the harder of the two to come across on a regular basis.

• Clams can be claimed through several different methods: connecting the game to your Facebook account, inviting five of your Facebook buddies to play the game, finishing off character quests (premium quests gift you with more clams), spending real world cash, help finish off the building process in your friends’ Quahog’s and successfully finishing off any quests that are represented by a white present box with a red bow on it.

2. Unlock Every Character Through The Completion of Buildings

• You’ll want to fill your city full of familiar Family Guy characters by completing the buildings needed to unlock them.

• We’re going to list some of the characters you’ll want to add to your Quahog, the buildings you need to finish to unlock them and what district you’ll be able to find them in.

• Once you successfully complete the required building needed to unlock a particular character, each unlocked character will come with an exclamation point marking the fact that they have some new tasks for you to attend to.

• You should always make it a mission to complete these character specific tasks as soon as they become available. Finishing off missions gets you more coins, clams and more viable unlockables for your roster and town.

• Like we mentioned before, clams are pretty hard to come by on a regular basis. Sure, you can buy over 100 clams for a few real-world bucks. But you want to make sure you spend the clams in your possession wisely so you don’t run low on them and have to spend even more $$$ on them in the future.

• Spend your clams on the building process by purchasing a 2nd builder who can help complete another building at the same time as another one.

5. Make Your Characters Active By Having Them Repeatedly Complete Short Term Actions for Quick Coinage and Longer Term Actions When You Step Away From the Game

WriterParty.com posted up a few tips regarding the fastest way to collecting more coins – giving you character’s short term and long term mission to complete during different circumstances:

The fastest way to earn coins is by doing the short term actions over and over for your characters, such as having Peter surf the bird or Chris find a new friends (which take a minute apiece) over and over. It’s tedious but it works. However, when you’re going to sleep or taking a long break from the game, set all of your characters to have long term tasks, such as Peter dancing the Shipoopi.

Head to the next page to learn about the connection between buildings, coin/experience payouts and much more game winning tips!