The “Robots in Disguise” are going to have a big 2014. Not only are they starring in a new film (Age of Extinction), they’re also going to do battle in a new action/adventure game – Rise of the Dark Spark. Before you check out Optimus Prime and the rest of the Transformers roster on the big screen, you should learn everything there is to know about this upcoming Transformers video game release.

1. Transformers: Rise of the Dark Spark Will Take Place at the Same Time as the New Movie

Transformers: Rise of the Dark Spark plot takes place before the Ark is officially launched in the “Aligned” continuity of the overarching series. The game’s events also take place simultaneously with the events of the Transformers: Age of Extinction film and its ensuing aftermath.

Hasbro and Activision will be handling the publishing duties for the game, while a newly selected game developer will develop it (Edge of Reality). The Dark Spark mentioned in the game’s title is a powerful artifacts this is capable of tearing holes into dimensions, which is why both Transformers’ universes have been brought together in this video game crossover.

Rise of the Dark Spark is the 3rd franchise installment in the Transformers: War for Cybertron series, which was was formerly developed by High Moon Studios. Even though the series has a new developer, it will feature the familiar elements of War for Cybertron and Fall of Cybertron.

2. It Will Feature Transformers from the Movies and Past Two Games

Transformers: Rise of the Dark Spark will reportedly feature over 40 playable Autobots and Decepticons from both the film and game universes:

3. Escalation Mode is Returning Alongside a New Leveling System

The popular Escalation online cooperative mode from the last two Transformers games will be making a return here. Four players will fight alongside each other as their chosen Autobots/Decepticons against increasingly tough waves of rival Transformers.

The newest feature in this game is the addition of a universal leveling/unlocking progression mechanic. Players will be able to collect experience points over the course of playing through both the single-player campaign and multiplayer modes. These experience points can be used to unlock a myriad of items and many more hidden collectibles.

4. It’s Being Released on Several Past-Gen and Next-Gen Consoles

5. The Nintendo 3DS Version of the Game Will Be a Strategy RPG

The 3DS handheld version of the game will be significantly different from the main console renditions. Not only does it have a different developer (WayForward Technologies), it’s also a strategy RPG.

The official website for the game released a few details on exactly this version of the game will entail:

Based on a similar storyline, the Nintendo 3DS game challenges younger gamers with strategy based gameplay and epic one-on-one 3D battles! The game alternates between two modes: strategic moves and 3D battle sequence. The game includes over 50 characters from both Earth and Cybertron universes. 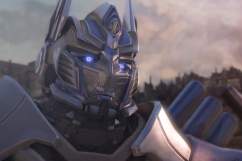 ‘Transformers: Rise of the Dark Spark’: Top 5 Reviews You Need to See