Nintendo is looking forward to ruling the gaming roost come this fall and holiday season for 2014.

During an exclusive Japanese Nintendo Direct livestream this morning (August 29, 2014), a huge slate of big reveals and announcements became public. The biggest one of them all centered around a brand new 3DS. Not only was this new handheld model given its official debut, several other bits of important Nintendo news came out.

Check out this summary on everything you need to know about Nintendo’s newest reveals.

1. The New Nintendo 3DS Was Unveiled for Japanese Gamers

In Japan, gamers will be able to purchase Nintendo’s aptly-titled “The New Nintendo 3DS.” This new rendition of the handheld gaming system will come with a longer battery life, a larger screen and a brand new C-Stick analog pad. This new 3DS will also boast a better CPU (which will provide owners with faster download speeds and improved web browsing/streaming activities) and an improved 3D display.

One of the more noticeable changes to come along with this new 3DS is the color arrangement for the face buttons. The game card reader has now been moved to the front of the system, plus the stylus and power buttons have also been placed near the front as well.

Customizable cover plate covers are also on the way for this New 3DS, plus an upgradeable SD memory card slot will be added to the back cover plate.

2. There’s a Standard and XL Version of This New 3DS Model

So far, no release dates have been announced for the U.S. and other territories. The Standard Edition will be offered in two colors: black and white. The XL Edition will come in Metallic Black and Metallic White.

3. The New 3DS’ Additional C-Stick Will Be Compatible With Several Upcoming Games; The Amiibo Figurines Were Priced

The added C-Stick analog stick for the new 3DS will be compatible with several new upcoming titles – Dragon Quest X: Online, Monster Hunter 4G and Final Fantasy Explorers. The New Nintendo 3DS will utilize the upcoming Amiibo figurines thanks to its implementation of built-in NFC capabilities.

Speaking of the Amiibo figurines, Nintendo revealed that each of these figurines will retail for $12.99. These figurines will be compatible with Super Smash Bros. Wii U, Mario Kart 8, Captain Toad: Treasure Tracker, Mario Party 10 and Yoshi’s Woolly World. The 1st 12 figures available for pre-order includes:

4. Xenoblade Chronicles Will Only Be Playable on This New 3DS Model, Plus Bravely Second Was Debuted

On top of the big reveal showcasing Shulk as the newest Super Smash Bros. Wii U/3DS character, it was also revealed that Monolith Soft’s Xenoblade Chronicles will be ported over to The New Nintendo 3DS.

Not only will this exclusive port only work with the new 3DS model, it will also take full advantage of the C-Stick analog stick and more. This 3DS edition of the formerly exclsuive Wii RPG will launch sometime in 2015 in Japan. No other territory release schedules have been announced thus far.

Another big 3DS RPG was shown to the Japanese viewing audience – Bravely Second.

Fans who have been clamoring for the official release date for Bayonetta 2, Nintendo finally threw you all a bone – it will hit stores on October 24, 2014. 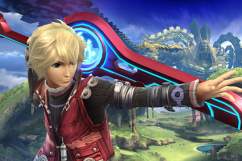