Here are the top 10 tips/tricks/cheats you need to know for Family Guy: The Quest for Stuff – Star Trek!

1. Get to District 3 to Get Riker to Crash Land in Quahog

• Family Guy: The Quest for Stuff is a great game on its own – but the huge Star Trek event update unlocks after you get Al Harrington’s, and that’s what you want. Build the Swanson House, get Quagmire’s cock out of a bottle (it’s a chicken), then keep playing until you unlock Al Harrington’s in District 3. And then Star Trek.

2. Help Riker and Riker’s Beard in the Crash Landed Shuttle

• The Enterprise’s shuttlecraft crash lands into Quahog carrying your Number One. Help him gather Beard Trimmers, Tricorders and Dilithium Crystals to unlock him! You’ll have to gather:

You have until April 30th of 2015 to unlock these special Star Trek characters, by the way.

3. Beam to the Enterprise!

• You’ve got the goings on in Quahog, but most of the new stuff is aboard the Enterprise, in a new playspace, in space. Tap the shuttlecraft to beam aboard, or tap the Enterprise HUD icon. Make it so. There’s a ton of integral devices and locations to utilize on the Enterprise, such as the Uncharted Planet Mystery Box and Sick Bay. The 1st location is great for unlocking awesome prizes, while the 2nd hotspot lets you unlock Beverly Crusher and Vulcan Quagmire. For a full walkthrough of the Enterprise, hit up this link.

• Tribbles are small, furry creatures that purr when you pet them. Sort of like cats, but less bitey. They also multiply very quickly. Pop them to collect Dilithium Crystals!

5. Feed Normal Stuff Into the Replicator to Get Special Stuff

• The Replicator, located in the middle of the Enterprise, allows you to craft special Star Trek items and decorations, like Ferengi Mort. You’ll need to make sure you have the required amounts of Like Support Energy, Synthesizer Core and other items needed to create new themed prizes. To unlock Ferengi Mort, you’ll have to gather 350 bits of Dilithium, 10 units of Life Support Energy and 5 Synthesizer Ore’s.

• Some rooms aboard the Enterprise can be built for clams. Many of these rooms give out resources more quickly. Others grant special bonuses, like more tribbles. A lot more tribbles.

7. Check All of Quahog’s Citizens to See Who Can Help Save the Crew

• Lots of Quahogians can help. When the event starts, don’t forget to poke around your town to see which characters give new stuff. Be sure to check them as new chapters unlock! Hint: try out Mort if you need Rainbows for Geordi La Forge.

8. Craft the Special Star Trek Outfits for Another Edge

• Once you craft Peter Griffin’s Starfleet outfit, you’ll get an additional source of Dilithium Crystals. You’ll need Red Shirts, Replicator Hamburgers, Captain’s Logs and Dilithium Crystals to get it. Start popping tribbles, and check back each week for new outfits. To fully unlock him, you’ll need the following amount of each item –

• You’ll find Geordi La Forge feeling around for his visor. He needs you to collect Rainbows and Children’s Books to help him, because obviously. Of course, you don’t have to take our word for it. The full suite of items needed to unlock this character are as follows:

• Family Guy: The Quest for Stuff’s Star Trek event rolls out over the course of the next month, all the way through the end of April. TinyCo promises that future weeks have new crew members, new content, and some surprise special guest stars. Check back on Thursdays to see what tribble trouble they get into. Keep your eyes peeled for Captain Kirk himself… 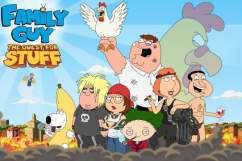 Family Guy: The Quest for Stuff: Top 10 Tips & Cheats You Need to Know