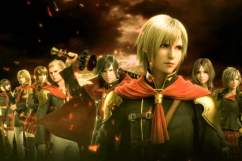 Square Enix is ready to restore the once untouchable public image of its beloved (but tainted…) Final Fantasy series. Along with new gameplay footage and hopes of the final release of Final Fantasy XV coming to fruition, an HD update for a former portable series spin-off is heading to the Xbox One and PS4. Here’s every important facet of Final Fantasy Type-0 that hardcore fans and curious newcomers need to know.

1. This HD Rerelease is a Port of a Former PSP Exclusive

Final Fantasy Type-0 was originally released in Japan territories only in October 2011. It was also formerly exclusive to the PlayStation Portable platform. In another interesting note about the game, it is a part of the famed “Fabula Nova Crystallis” sub-series, which also includes Final Fantasy XII and Final Fantasy XV. The HD rerelease of this action RPG is now heading over to the Xbox One and PS4 on March 17, 2015.

2. The Plot Focuses a Group of Powerful Students Who’re Brought Into an Epic War

The main storyline threads focuses on a group of 12 students who fall under the title of “Class Zero.” These students ply their trade as weapon and magic wielders at the Suzaku Peristylium academy in the Dominion of Rubrum. A huge conflict begins when the Militesi Empire attacks the nearby Crystal States of Orience in order to gain control of their magical crystals.

After Rubrum is targeted and attacked during this assault, Class Zero is tasked with getting involved in fending off the Militesi Empire. The 12 students will also have to figure out the secret behind this war and the significance and existence of the crystals being fought over.

3. The Battle System is Similar to the One Featured in Crisis Core -Final Fantasy VII-

FINAL FANTASY TYPE-0™ HD – Gameplay Overview TrailerShowcasing the development team’s creative talent by bringing to life a large cast of expressive characters in a rich and engaging storyline, FINAL FANTASY TYPE-0 HD is full of emotional drama, powerful politics and epic in scale. It offers a new type of FINAL FANTASY experience not seen before in the series – one that is sure to captivate a new generation of players as well as long-time fans. Pre-order to secure the FINAL FANTASY XV playable demo available exclusively with FINAL FANTASY TYPE-0 HD while supplies last. PRE-ORDER NOW: http://bit.ly/fft0_preorder http://www.facebook.com/finalfantasy http://www.finalfantasytype0.com2015-02-26T14:00:04.000Z

For those who have experienced the real-time battle system sported in Crisis Core -Final Fantasy VII-, you’ll be instantly familiar with the inner workings of the battle system for Final Fantasy Type-0 HD. Players will head into battle with three chosen characters from Class Zero. You’ll get to use one of them while the CPU controls the other two, plus you’ll be able to switch to the other members of your current party at any time. Physical attacks and special magical abilities are mapped to your controller’s face buttons, so you’ll be able to pull off attacks in real-time enemy encounters.

When it comes to the use of magic, three types are available – fire, ice and thunder. When enemies are vanquished during battle, your party of characters will be able to power up their magic abilities by drawing in Phantoma energy. This energy can then be used towards character upgrading efforts in the “Alto Crystarium” system. The series familiar summoned monsters are referred to here as an “Eidolon.”

Check out the video posted above to gain a better overall view of the game’s gameplay mechanics.

4. Each of the Main Characters Use Their Own Weapon and Fighting Style During Combat

Each of the 14 students belonging to Class Zero sport their own weapon types and fighting styles. Check out the list below to get acquainted with each character’s chosen weapon:

5. The Game’s Visuals Have Been Upgraded With Enhanced Lighting Effects and an Expanded Color Palette

As expected, Final Fantasy Type-0 HD comes with upgraded visuals. Along with that feature, the game’s visuals also sport an expanded color palette and improved lighting effects. The character models have been remodeled as well, which means the ones seen in the game’s cutscenes are now being used for the gameplay models as well. Take a look at the video posted above to see a graphical comparison vid between the original and HD versions of the game.

6. The Multiplayer Option Won’t Be Available in the HD Version, But Elements of It Will Be Put Into the Single-Player Campaign

Light multiplayer elements were featured in the original version of the game. These multiplayer functions allowed players to group up in battle for short skirmishes during battle. Some of the features seen in the multiplayer of the original release have now been moved over into the single-player features for the HD version. For instance, the magic and accessories exclusive to multiplayer are now a part of single-player.

7. Four Separate Difficulty Modes Will be Playable in this HD Rerelease

8. This Game Features a Rating That’s Never Been Seen Before in the Final Fantasy Series

In a rare move that hasn’t been seen before in the Final Fantasy series, Final Fantasy Type-0 is the 1st game in the series to receive a Mature rating.

9. Pre-Ordering the Game Will Give You Access to the Final Fantasy XV “Episode Duscae Demo”

One of the bigger selling points for this HD rerelease is the pre-order bonus offering of an exclusive Final Fantasy XV demo. This demo (entitled “Episode Duscae”) will allow players to venture into the world of the upcoming Final Fantasy XV. The video posted above showcases a brief walkthrough of what players can expect to experience during their time with the demo.

10. Pre-Ordering The Collector’s Edition Directly From Square Enix Will Place You in the Runnings for a Special Contest

A special Collector’s Edition of the game is available exclusively through the online Square Enix store. For those who pre-order the game before release, they’ll be entered into a special contest. The winner will win a Final Fantasy Type-0 custom Xbox One and PS4, an art canvas of Ace, a Vermilion Bird lapel pin and several other runner up prizes.

The video seen above goes into the Collector’s Edition’s items in detail. The photo posted below showcases the custom Xbox One/PS4 being offered to the winner of Square Enix’s contest. 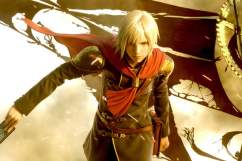 ‘Final Fantasy Type-0 HD’: The Screenshots You Need to See