Here are the top five tips/tricks/cheats you need to know for Down The Mountain.

1. Be Careful of Those Super Harmful Tiles

• Down The Mountain features the pixelated visuals of Crossy Road and the hopping mechanics featured in the classic arcade hit Q*Bert. Like the aforementioned game we just spoke of, there are hazardous tiles that can spell certain doom for your boxy avatar. Avoid tiles that have sharp edges protruding out of them, of course. And you should always be careful about hopping on water tiles since they’ll slide you down a predetermined path unless you hop off quickly. As for those sandy tiles, make sure you hop off those ASAP too since they sink if you linger on top too long. That effect applies to TNT tiles too, except that they explode if you stay atop them for a couple seconds extra. And lastly, steer clear of those tiles that feature enemies such as moving cars or other animals for obvious reasons.

2. There’s a Ton of Characters to Unlock

• Like Crossy Road, there’s a great amount of unlockable characters to play with. Cute mini avatars such as Collins, Adelaide and Milton can be accessed by completing the sole mission stated underneath their name. When you finish a stage run, click on the hopping character you currently selected. You can check out each character and what it takes to unlock them within this menu. The majority of them can be added to your roster by completing a certain number of missions or simply opening a mystery box.

3. The Mobile Time Forward Trick Can Be Used to Take Advantage of The Spin-to-Win Game

• After spinning during that minigame and getting your prize (or nothing at all if you’re unlucky), you’ll have to wait a few hours before your next spin. This roulette wheel game awards you with keys and stars, so its always worth giving it a spin. If you’d like to immediately access the spinning wheel prize game, just forward your device’s time six hours ahead. Once you do that, return to the game and the timer for your next spin will be up. Do this as much as you’d like if you want a ton of free spins.

• The main currency of the game comes in the form of stars. While you’re hopping down all those danger filled tiles, make sure you’re collecting as many as those as you can. Stars can be used to actually bypass any mission that hasn’t been completed yet. Plus they help you rack up a great score during any of your stage run’s.

5. Be Careful Around Poison Tiles, Especially When You Need to Hop on ‘Em

WriterParty.com wanted players to know about another dangerous tile that they may be forced to jump on:

Watch out for the poison tiles as much as anything else, because often times the only path that you can go is on a poison tile. If you hit a poison tile, then you will die in about 10 seconds. Start looking down the stage for the antidote, which looks like a potion, and then hop down for it and collect it to cure yourself. 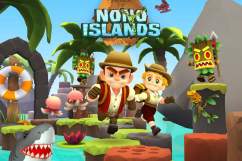