There’s a certain fanbase of soccer fans who stick to the Pro Evolution Soccer dynasty. Then there’s a whole other cast of fanatics who prefer EA Sports’ brand of soccer.

FIFA 16 is coming to the table with innovative features, plenty of new leagues/teams and much requested updates to the action on the field. With 78 stadiums to play in (50 of which that are based on real locations), you’ll truly feel the international flavor of such a well revered sport. EA Canada has paid close attention to the complaints thrown at FIFA 15, so we all know they took extra care with this year’s sequel.

Welcome to our hub of information regarding the freshest features present in FIFA 16.

1. FIFA Ultimate Team Draft, a Revamped Career Mode and Plenty of New Gameplay Features are on The Way

The biggest mode in FIFA 16 comes in the form of FUT (FIFA Ultimate Team) Draft. This mode will challenge players to build their own custom, 5-player team. You’ll be able to draft new players by unlocking or purchasing new player packs over time. This process then goes towards the development of a team that fills the positions needed to create perfect on-field synergy.

Over the course of four matches, you’ll be tested with bringing your team to victory and earn even more player packs and other types of rewards. Xbox One and Xbox 360 owners will have exclusive access to the use of more past soccer legends. When put together within the same team, legends will develop a League Chemistry link with other legends.

FIFA 16’s Player Training mechanics will do an even better job of representing the growth in your squad players. As the team’s manager, you’ll be put in charge of selecting up to five players from your team and have them focus on improving their skills in several training drills. For instance, you can simulate the training of a certain player and choose to increase their mastery of 1-on-1 Defending or Dribbling.

FIFA 16 also has a ton of improvements that the series most hardcore fans will notice on the field. The video posted above delves into some of the finer alterations and upgrades made to the on-field defense, midfield and attack gameplay.

2. 12 Women’s National Team Will Be Available for Play for the 1st Time

For the very 1st time in FIFA history, the team roster will include several Women’s National Teams. Female soccer pro’s such as Steph Houghton, Alex Morgan and Christine Sinclair will be usable amongst their appropriate soccer teams (however, 13 women have been removed from the game’s roster due to NCAA rules and regulations). You’ll be able to participate in women’s national games (whom can only compete against other women’s teams) in modes such as Match Day, Offline Tournament and Online Friendly Matches.

Here’s the full list of Women’s National Teams that will be playable in FIFA 16:

For a full listing of every international league and team that will be a part of FIFA 16, check out the following link.

3. The List of Tunes You’ll Be Playing Soccer To Has Been Fully Revealed

The full soundtrack for this year’s installment is pretty legit. There’s musical selections from Beck, Skylar Grey, John Newman and a host of other world celebrated artists. Hit up the list below to check out who’s tunes have made the final cut for FIFA 16:

You can get a full listen to the game’s soundtrack at this playlist link.

4. Two Editions of The Game Are Available – Standard and Deluxe

The theme of this year’s lineup of EA Sports’ games are the two editions each game is available in. FIFA 16 follows that same formula by having two versions of the game available for those willing to make a pre-order – Standard and Deluxe. Pre-ordering the Standard Edition of the game will grant you $15 worth of FIFA Ultimate Team Gold Packs (15 packs).

You’ll get a much bigger bonus with the Deluxe Edition since you’ll $50 worth of FIFA Ultimate Team Premium Gold Pack content (40 packs), access to Lionel Messi for your Ultimate Team season for up to five games and usage of the “KO” and “BAILANDO ROBOT” goal celebrations.

5. A Special Xbox Bundle Comes With a Digital Download of The Game

Like the Madden 16 Xbox One bundle you’ve laid eyes on before, a FIFA 16 console bundle is also being offered. This EA Sports/Xbox One package comes with the following: 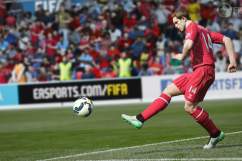 ‘FIFA 16’: The Screenshots You Need to See