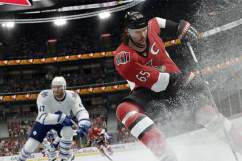 EA Sports wants everyone to enjoy a nice old round of hockey. Gamers who have shied away from the NHL series have every reason to do so. With such a daunting array of player options and deeper mechanics that only the most ardent fans utilize, newcomers may have not approached this series since its inception. NHL 16 is the most user friendly entry in the series yet, thanks to its persistent on-ice trainer and packed feature set.

As soon as you land your skates on the ice, you’ll notice the on-ice trainer in action. The barrier of entry is no longer an issue here, thanks to the color coded areas on display. The game shows you where to aim your shots, who’s wide open for perfect passes and where you should position yourself on the defensive side. Pausing in between periods will give you even more assistance due to the presence of coach tips. The menu grading system shows you your strengths and faults as you play, which is a great aid for all types of players. By the time you’ve put some time into this sim, you’ll start to approach the game of digital hockey and improve by leaps and bounds.

On the additional mode front, NHL 16 is noticeably more packed than NHL 15. Along with your expected modes of play comes Season Mode, EA Sports Hockey League and Online Team play. Season Mode takes you into the seemingly never ending run to the Stanley Cup. You always have the option to simulate games and play the ones more pertinent to your custom player’s progress. EA Sports Hockey League changes the formula up by offering athletes who’re attached to certain classes. Most of the fun of this mode comes from constructing the right team and paying attention to which player classes need more attention. And finally, the option to play online solo or with another player next to you is a major bright spot.

NHL 16 is great, but its not without its faults. The commentary lineup of Doc Emrick, Eddie Olczyk and Ray Ferraro tends to repeat the same lines during your games across each mode. You’ll find yourself wanting to skip certain games in Season Mode or blocking the commentators out altogether to dodge their repetitive lines. The passing mechanics could use some tweaking as well. It’s far too easy to accidentally pass to no one and give up game winning interceptions. The gameplay remains great, but there’s still room for minor improvements.

NHL 16 is a definite upgrade over last year’s somewhat bare bones release. The new on-ice training system does an incredible job of introducing both beginners and veterans alike to becoming a hockey pro. The return of fan favorite modes (EA Sports Hockey League, for instance) does a great job of making this hockey sim’s package fulfilling and worth the annual purchase. The commentary can be a chore to listen to and the passing mechanics can be a headache at times. NHL 16 is filled with plenty of modes, tight gameplay and an authentic arena atmosphere that does right by the game of hockey.

Read More
Game Review, Games, NHL, PS3, PS4, Sports Games, Xbox One
Take a trip with us around the ice as we break down our final thoughts on NHL 16.