Black Friday 2015 is almost here, and that, of course, means big savings for us gamers. So before you go stuffing your faces with that glorious turkey leg, you’ll probably want to plan out your shopping day. There are quite a number of Black Friday video game deals available, and both PS4 and Xbox One gamers are going to have a great holiday season. Seriously, there are some great deals out there if you’re looking for some of the year’s best games, or if you’re looking to finally pick up the next generation console.

Each major retail outlet, including Amazon, Wal-Mart, and Kohl’s especially, are finding their own ways to bring gamers into their stores (or online) this year. And, we’ve included the Xbox One in just about every gift list this season. So without further ado, here are the top 5 best Xbox One Black Friday deals & sales of 2015:

Xbox One gamers have seen a number of great games in 2015, and Black Friday at Wal-mart will be the best time to buy some of 2015’s best games. The Witcher 3: Wild Hunt (a serious contender for the coveted Game of the Year), Batman: Arkham Knight (Batman’s best game yet, as long as you aren’t a PC gamer), and Mad Max are all going to be on sale for $25 each. There are plenty of other games that will fall into the $25 category, such as The Elder Scrolls Online, Splatoon (Wii U), Mortal Kombat X (a sleeper hit of 2015), and Grand Theft Auto V. Games are only available while supplies last, so you might have to actually head to Wal-Mart on Thanksgiving if you want to get these great games, unfortunately. You can also pick up Need for Speed right now for $39.99 on Amazon. 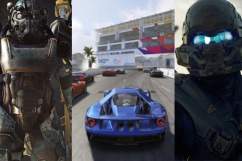 If you’re an Xbox One gamer looking for a TV upgrade to make your games look even better, check out Best Buy’s ridiculously great TV Black Friday deal, a 49-inch Toshiba 1080p LED HDTV for just $149. The TV usually retails for $479, so this mega price drop absolutely crushes the competition. Halo 5: Guardians will look absolutely fantastic on a high-def 49-inch screen.

When: Doors open at 5PM Thursday night, Reopens at 8am Friday

If you’ve yet to get into Disney Infinity Star Wars 3.0, your best bet is to head to Kohl’s this Black Friday to pick it up for $39.99 (it’s regularly $64.99). They have other deals that are worth the trip, including $10 off an official Microsoft Xbox One wireless controller, as well as 30% off select games like Destiny and Just Dance 2015. Don’t forget, you also earn $15 in Kohl’s Cash for every $50 spent on Black Friday. Conversely, it’s available at Wal-Mart for $37 (although, you don’t get the Kohl’s cash with it).

When: Doors open Thursday at 6:00PM

Amazon and Wal-mart are both offering Guitar Hero Live for $69.99, although Amazon’s is live RIGHT NOW. The newest game in the franchise takes the realism to an entirely new level, and for a limited time, it’s now $30 less than the MSRP. Rock on.

The best Xbox One Black Friday deal is the Xbox One Gears of War Bundle for $299 that will be offered by the Microsoft Store, which is also offering $50 off any of their other bundles. This is the best Xbox One deal of the season, excluding Wal-mart’s Xbox One Cyber Monday deal which will see the exclusive white console with a bonus controller go for $299.96.

When: Thursday 12AM EST

Want to see even more great deals? Visit Amazon’s Black Friday deals page to see all the latest sales. You should also visit our Gifts section to get recommendations for all the people on your holiday shopping list.

Read More
Black Friday, Microsoft, Shopping, Xbox One
The Xbox One also has some sweet, sweet deals to serve as your dessert after your Thanksgiving dinner.