Remedy Entertainment has a long and respectable track record within the video game spectrum. This talented development team has produced classics, such as the first two Max Payne games and both Alan Wake titles.

Now they have partnered with Microsoft Studios once again to deliver a brand new IP in the form of Quantum Break. This 3rd-person shooter will not only rely on its mix of gunplay and wicked time manipulation powers to tell its interesting plot. The game will offer gamers live action episodes that will further explain the crazy events transpiring before your very eyes. This mix of gameplay and an action packed TV show looks to be one of the more successful experiments emerging on the Xbox One and PC platforms.

To get you ready for the world of Quantum Break, we’re here to provide you with all the important facts you need to know about it.

Quantum Break is broken into two halves – gameplay and an assembly of live TV show episodes. As you play through the game, you’ll be thrown into “Junction Points” that push you to make an important decision. The decisions you make will impact the rest of the game and will also alter the events that take place within each live-action episode. The video game portion will follow the events of the protagonists, while the TV series will play out everything that happens to the antagonists.

The story beings at the fictional Riverport University. When a time travel experiment goes horribly wrong, time itself begins to break down. This occurrence also leads to two friends now turned enemies (Jack Joyce and Paul Serene) gaining time-manipulating powers. You’ll play as Jack Joyce as he looks to fix time, put a stop to Paul’s plans and stay ahead of Paul’s company (Monarch Solutions). Jack will encounter several individuals who either seek to aid him or harm him during his all-important mission.

2. Several Standout Actors and Actresses Play the Roles of the Game’s Massive Cast

The live action episodes that play in between each gameplay section will showcase Quantum Break’s noteworthy lineup of actors and actresses. You’ll also get to see all of them act out their parts within the game itself thanks to its strong visual presentation. The live-action Quantum Break series was produced by Lifeboat Productions and Microsoft. The series consists of four episodes that are 22 minutes each.

Check out the list below to see who you’ll be encountering during your time with the game and its accompanying TV series:

Jack Joyce will run into Monarch Solutions’ security forces, who employ the use of powerful firearms and their own time-manipulating powers. Jack can fight back with the very same weapons and abilities. As you play the game, you can freeze your enemies within a time globe and shoot them down while they’re frozen inside it. Jack can also pull off swift dashes, slow down time in order to run up on your foes for a melee maneuver and even pull off a powerful “Time Blast.” Along with those powers, Jack can choose to speed up time and protect himself by releasing a “Time Shield” during intense gunfights.

When you’re not sticking to cover and shooting down a group of soldiers, you’ll encounter environmental puzzles. These gameplay sections test your time powers as you look for the best way to get through objects that are stuck within a constant time loop. Jack has to either slow down time or stop it altogether as he navigates broken bridges, imploding structures and more.

4. Obtaining a Copy of This Game Will Gift Players With Two Backwards Compatible Titles

Remedy Entertainment wants to make sure that Quantum Break players also get a chance to experience their earlier game releases. Simply buying a copy of the game means you’ll automatically receive a digital download token for Alan Wake, an Xbox 360 backwards compatible title. That version of the game also comes with its DLC add-on’s – “The Signal” and “The Writer.” Now if you choose to pre-order Quantum Break, you’ll also get another backwards compatible game in the form of Alan Wake’s American Nightmare. For those who get a digital copy of Quantum Break, redeeming it means you’ll also get one for Windows 10.

5. Of Course, There’s an Xbox One Bundle That Comes With This Game

If you still haven’t managed to obtain an Xbox One and you’re pretty amped for Quantum Break, this bundle seems to be the way to go. This special edition Xbox One console package comes with a white version that includes a 500GB hard drive. Not only will you obtain a digital download token for Quantum Break, you’ll also be gifted with the digital versions of Xbox 360’s backwards compatible games Alan Wake and Alan Wake’s American Nightmare. This bundle also comes with a 14-day Xbox Live Gold trial and the usual goods seen in other Xbox One bundles. 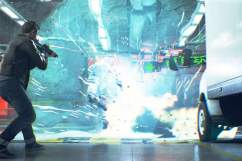