Nathan Drake has been all around the world and escaped death by the skin of his teeth every time. After the events of Uncharted 3, Drake finally made the decision to live a normal life and abandon his treasure hunting ways.

But he’s soon drawn back into his most dangerous profession after he comes into contact with a brother he long thought was deceased. Drake, his brother Sam and the allies who’ve stayed by his side since the beginning return in the upcoming Uncharted 4: A Thief’s End. Development studio Naughty Dog has been working hard to make sure this expected final installment in the series sends Drake out on a high note. The visuals are even more impressive than before, Drake has access to a new gadget and the multiplayer returns with plenty of new mechanics to enjoy.

It looks like Uncharted 4 will be an early contender for 2016’s PS4 Game of the Year. Here’s everything you need to know about this major upcoming release. This may be the final time we enter the wild world of Nathan “Nate” Drake…

1. This Time, Drake Gets Thrown Back Into Danger Alongside his Long Lost Brother Sam

Uncharted 4 takes places three years after the conclusion of the third entry in the series. Drake has finally given up the hunter fortune life and now makes an honest living. Him and his wife Elena Fisher are enjoying their time together as well. All of a sudden, Drake runs into his long lost brother Sam. Sam has re-entered his brother’s life seeking his help. Due to this recent development, Drake once again enters a world full of danger and priceless treasure as he heads out on another adventure with Sam by his side.

Drake and Sam take on this new journey for two reasons: to find out the truth about a hidden pirate colony known as Libertalia and locate the fabled treasure tied to it. This hidden treasure also has some connection to Captain Henry Avery. Some of the other characters who will play a big role in the game include Drake’s buddy Victor “Sully” Sullivan and a new female named Nadine Ross. The whole “A Thief’s End” moniker that’s tied to this entry’s title has given everyone reason to believe that somebody important will meet their sad end. Will it be Drake? Or maybe even Sully? We’ll just have to wait till we get our hands on the game to find out.

2. Drake Has a New Piece of Gear That Improves his Vertical Maneuverability

If you’ve been keeping a close eye on all the gameplay trailers released for Uncharted 4, we’re sure you’ve noticed Drake’s newest gadget. Drake can hang in the air for a lot longer than he ever has due to his grappling hook tool. Throughout the game’s varied locales, you’ll have the opportunity to locate high points you can grapple to and swing to and fro from. Drake has the ability to unhook from his newest gadget and land a finishing blow on any enemy that’s unlucky to be below him. This grappling hook can also be utilized during the multiplayer portion of the game.

3. The Multiplayer Mode Returns With a Several New Mechanics

The multiplayer modes introduced in Uncharted 2 has been given some improvements here and there since debuting. Now that we’ve arrived at Uncharted 4, fans can expect to hop into the fast running and gunning play style that they’re used to. Some of the playable characters included in the multiplayer modes includes Drake himself, Sully, Elena, Cutter and several other series mainstays.

Two of the newest additions to this mode are Sidekicks and Mysticals. You can acquire currency as you fight on chaotic maps and use it to bring in one of four AI companions. Sidekicks can either heal fallen teammates, snipe enemies from afar or move across the map as a powerful tank soldier. It’s also possible to spend your currency on Mysticals, which are items that grant your character supernatural powers. The video posted above describes the Mysticals you can obtain and equip. 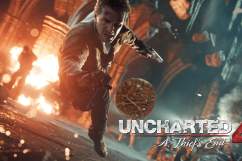 4. You Can Pick up Uncharted 4 Through Four Different Methods

Uncharted 4’s Special Edition comes with everything mentioned above except the statue and the bonus multiplayer items. In place of that, you’ll get “Uncharted Points” that allow you to purchase extra multiplayer content. Pre-ordering the game on Amazon means you’ll be awarded with:

5. Sony is Marking the Launch of Uncharted 4 With a Special PS4 Bundle

It should come as no surprise that an Uncharted 4 PS4 bundle is set to arrive on launch day. This console package will gift you with a brand new PS4 emblazoned with custom art and adorned in gray blue. The controller that comes with this bundle matches up with the console since it’s painted in the same color sheen. Getting this bundle means you’ll also get a physical copy of Uncharted 4. If you’d like to complete this package, there’s a PlayStation Gold Wireless Headset – Uncharted 4 Limited Edition up for grabs.