Pokemon Go is being flooded with one-star reviews on iTunes and Google Play as fans grow increasingly frustrated with the game’s bugs.

Over the past few weeks, Pokemon Go players have encountered server issues and glitches that have completely altered the way the game is played. This had already been inspiring frustration in the online community, but the issues were exacerbated by the fact that updates have recently been released that not only fail to address any of these issues but that actually remove key features from the game.

Making matters worse is the fact that Niantic Labs, the game’s developer, has not been responsive to the outcry among fans. They have yet to release any sort of statement or acknowledgment of the problems, other than at Comic-Con when John Hanke, CEO of Niantic, said that they were aware of the issues.

For many, the last straw occurred on July 30th; this update, the first in 10 days, did not fix any issues but instead completely removed the ability to track nearby Pokemon. The game’s developer has also been shutting down third party tracking websites like PokeVision.

Also removed in the new update the battery saver mode, a helpful feature that allowed players to keep the app open without draining their phone’s battery. This was causing some glitches for players, and so Niantic just got rid of it.

Following the July 30th update, many began to flood the iTunes store and Google Play with one-star reviews. This resulted in the app’s rating falling quite dramatically. But on the iTunes store, when a new update for an app is released, the rating is reset and all negative reviews are purged. So when another update was released two days after the previous one, and when it contained no significant changes, gamers were irate, believing this was merely a tactic to silence the critics and restore a positive rating.

On Google Play, though, releasing an update does not affect an app’s rating, and no Android equivalent to the August 1st update has been released. As of this writing, there are nearly 315,000 one star reviews for Pokemon Go on Google Play, with the vast majority being submitted in the past few days. Users have complained that the game started off fun but has become increasingly unplayable after the recent updates.

Here ares some of the best and most negative Pokemon Go reviews on the Google Play store right now:

My favorite phone app has been rendered basically unplayable after the shutdown of third party tracking. Used to have so much fun finding nests to travel to and meeting people and catching Pokemon in AR! Shame to see it go but it was fun while it lasted!

Since new patch this game is a lie. You walk blindly now never really knowing where the pokemon you want is. Blocking the third party maps and taking the tracker off was a terrible decision. If they fix it would definetly be a 5 star app.

Niantic has successfully shaken my faith in a video game series that I have enjoyed for almost twenty years. No communication between them and the avid pokemon fan base has turned a largely loyal group into a mob of unsatisfied customers. Good job, Niantic, you have fulfilled and subsequently crushed my childhood dreams within a matter of weeks. I would delete the app if I hadn’t invested money into it already.

What started off as an alright game that motivated people to actually exercise has turned into a game where you sit at a lured Pokestop to catch your Pokemon. The removal of the tracker unfortunately has taken away the only fun part of this game. Niantic’s lack of communication continues to be an issue just as it was with Ingress. Hoping the company will. Bring back the tracker and fix the issues, but as of right now I would say to avoid this game.

No updates regarding existing bugs while new ones are introduced with each patch. Ridiculous.

Most games improve things that don’t work properly, but you guys just remove it?! I now have no idea how close Pokémon are, and you shut off Pokevision. Considering how much money you’re making, this is poor. Fix the tracking or enable Pokevision again for a better rating.

Recent update destroyed everything good this game promised when it was released. Now it is not even worth the space on your device. Do not install this game.

The game was a lot of fun the first few days. Then the server issues, constant restarts of the client to make it work. There was ridiculous battery drain. I was willing to overlook all of this. The family was taking walks and going to there park together! Then the in-game tracker was broken. A third party site came to the rescue.. then Niantic completely removed tracking in game and shut the third party site down. Now the game is mostly pointless and unplayable. Also decreased spawn rates.

Recent update ruined the game. No tracking and harder catch rate. Wtf. I know you want people to buy more pokeballs but damn. 10 pokeballs to catch a magikarp and 15 greatballs to catch a squirtle? Your milking and neglect of the community is top notch

The game has gone from a fun “search for Pokemon” to a game that I might keep open while I walk places and hope that a Pokemon shows up along the way. They have removed the only core gameplay element, using the footprints to track down Pokemon. Now the game is just a Skinner Box where you press buttons and watch numbers go up with a Pokemon skin. You can get the same enjoyment from cookie clicker and have a tenth of the battery drain. This doesn’t even include the horrible support from Niantic.

In addition to leaving one-star reviews, many Pokemon Go players have been showing their frustration by requesting refunds from Apple and Google, and the majority of them have successfully gotten their money back. 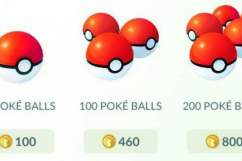 ‘Pokemon Go’ Refunds: How to Get Money Back from iTunes and Google Play