SNK has been non-existent for a couple of years now. Fighting game juggernauts such as Capcom, Bandai Namco and Atlus have continuously released great products into the market while SNK has remained silent. The 13th edition of King of Fighters feels like it came out ages ago, which makes the arrival of the official 14th edition such an anticipated event. The King of Fighters XIV represents SNK’s return to fighting game royalty and adds another quality battler to the market in 2016. If you’ve been on the fence about some of the other fighters that launched this year, then you should hop onto the KOF 14 bandwagon and not have to worry about being disappointed.

KOF 13 looked incredible with its focus on 2D animated sprites. That major visual element has been switched to full 3D models for the stages and the characters themselves. Everything within this entry looks similar to the Maximum Impact spinoff titles; only this time, the camera has been pulled back to reflect the old-school setup and style of the classic KOF games.

While this entry in the series doesn’t look outright terrible, its graphical presentation isn’t all that impressive. This fighter would look right at home on last-gen consoles, to be quite honest. But fighters aren’t all about their standout graphics and nothing more. On the actual gameplay front, KOF 14 makes up for its lackluster presentation in troves. It’s possible to pull off amazing combos due to the many mechanics you can master (Max Mode, EX Moves, Super Special Moves, Climax Super Special Moves etc.)

This series has always been known to include a plethora of classic and entirely brand new tournament entrees. KOF 14 looks to be the entry that has the largest roster to date. Longtime tourney entrants make their grand return and even some of them add a new fresh face to their team. For example, Chang and Choi ditch their heroic partner in favor of a fresh villain known as Xanadu. As for Kim, he decides to partner up with his trusty mentors Gang-Il and Luong.

Most fighters don’t do a good enough job with its roll call of fresh additions. KOF 14 shines the most in this department. New characters such as Alice, Kukri, Mian, Hien and even the cocky boss man Antonov round the roster out perfectly. But there’s definitely a few misses when it comes to cool new faces and playstyles (we’re looking at you Sylvie, Meitenkun, Xanadu and Love Heart). Overall though, everyone should find a set of characters to become quickly attached to.

When it comes to the package of modes on hand for you all to enjoy, there’s nothing to worry about on that front. You can choose to play through the game’s Story Mode, which comes with fully animated cutscenes and humorous ending sequences. Old fighting game mode standbys are present, such as Time Attack, Vs., Survival, Mission and Practice. As you win offline and online matches, a wealth of Gallery related bonus goodies unlock and give you a ton of throwback images to look at and catchy tunes to listen to.

The online modes offering features the best combination of playable content. You can hop online to compete in singles encounters, team engagements and even the type of team battles where two teams of three human players battle it out. The online worked pretty well during our time spent with the game, but it’s clearly having issues now that the player base has expanded beyond reviewers and QA testers. We’re looking forward to a patch that will improve things immensely.

The King of Fighters XIV definitely lived up to the hype. The fighting game system featured here is full of deep mechanics that will cater to the more hardcore player set. Plus incoming casual fans will have no issue getting just as good due to the tutorial modes on hand here. The roster is mostly amazing, but there’s a few new characters who needed to be kept away from such a great fighter. Content wise, you’ll have plenty of great modes to furiously play through. While the visuals aren’t as favorable as they should be, KOF 14 manages to stay strong due to its impressive gameplay. 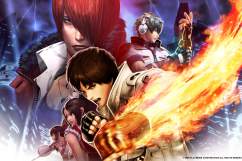 ‘The King of Fighters XIV’: 5 Fast Facts You Need to Know