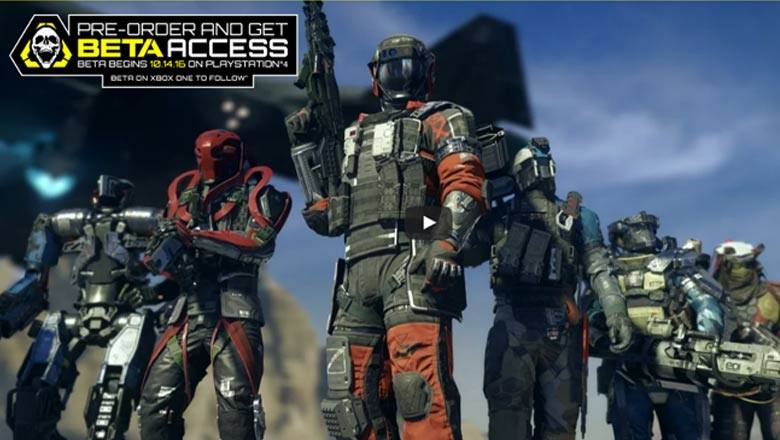 **Update: The Call of Duty: Infinite Warfare beta schedule has been announced.

Good news: if you preordered Call of Duty: Infinite Warfare for PS4 or Xbox One, you will have access to the game’s multiplayer beta.

All you have to do is go to the Call of Duty: Infinite Warfare beta page and click the button to enter your beta code. You should have received a code from the retailer when you preordered the game, most likely either printed on the receipt or via e-mail. You will need a Call of Duty account (you can create one for free if you don’t have one) and the site will prompt you to link it with your gaming account. If you purchased your copy through the Xbox One or Playstation Stores, you don’t need to do anything; according to the beta FAQ, you will be automatically registered and don’t need an access code. If you’ve previously entered a code, you can also check your status via the link above to see if you’ve already been granted access.

The day before the beta opens, all players who registered will receive an e-mail containing a beta token and instructions for redeeming it and downloading the beta. If you preordered through the Xbox or PlayStation Store, you won’t need a beta token; the beta should simply be available to download through your console’s dashboard.

The Call of Duty: Infinite Warfare PS4 beta begins on October 14 at 10am PDT for PS4 (with Xbox One to follow), so there’s still time to preorder if you haven’t already done so. The first weekend will run through October 17 at 10am PDT. Weekend 2 will include Xbox One and run from October 21-24 at 10am PDT. The bad news for PC players is that the multiplayer beta is apparently skipping PC entirely.

Call of Duty: Infinite Warfare is scheduled to release on November 4, 2016, for PlayStation 4, Xbox One, and PC.

Keep checking this space for further details and stay tuned to Heavy.com for all your gaming news.