Action, action and plenty of more action. It’s what we request from summer blockbusters, our chosen lovers and most importantly, our video games.

Over on the mobile side of things, a great number of fun action games become playable via the Google Play store. Plants vs. Zombies returned with a new playable format, plus some brand new IP’s sprung up with some interesting concepts to play around with. We’ve got some awesome picks here that deliver just the right amount of hacking ‘n slashing, endless running, infinite climbing and blocky running ‘n gunning action. These top five action Android games are not to be ignored, gamers.

Get ready for another dose of our top picks for best Android action games.

We’re pretty shocked it took this long for Plants vs. Zombies to take a dip into the collectible card game sub-genre. Clash of Clans has had great success with it and that’s exactly the same case with PopCap/EA’s most popular mobile franchise. Plants vs. Zombies Heroes is what you’d expect: you’ll need to construct a team of either trusty plants or zombies and align them with you chosen hero. For example, you can step into the heroic role of either the plants’ Green Shadow or the zombies’ Super Brainz. There’s a ton of character cards to collect and put to work on the lanes catered towards real-time skirmishes. The Plants vs. Zombies formula makes all the sense in the world with this new spinoff. 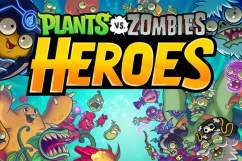 The year is 2085. A massive computer network hack has caused a whole group of robots to bug out and begin attacking humans. Smashing The Battle puts you in charge of one of two robust heroines who have the hack ‘n slash skills needed to save those humans. The action never grows old as you move across a wealth of stages and tackle them via several challenge modes. You can adorn your heroine in some truly tantalizing costumes, plus you can build her up into a true juggernaut through the addictive upgrade system. Smashing The Battle sticks to the tried and true formula of slick melee focused combat and cool looking avatars. It does it and it does it so, so well.

Roman Atwood and his jobless buddies have finally found a new paying gig. Problem is that their newfound job is dangerous as all hell. Smile Inc. is an endless runner that places your hapless crew into an office filled with all types of dangers. Running vertically to new floors can be done just as long as you avoid all those sharp hazards in your way. Along with all that risky business, you’ll need to dodge other booby traps and a ton of other killing machines. Doing so successfully helps you unlock all types of wearable gear and super helpful power-ups. Smile Inc.’s gameplay is addictive…PLUS THEY HAVE SOME AWESOME HATS! Who doesn’t like hats, right?

The Amazing World of Gumball resonates with our young souls so much. Cartoon Network has been churning out some fun loving mobile games based on its current array of shows. Super Slime Blitz – Gumball brings us an endless platformer that features over 30 familiar characters from Gumball’s loony whereabouts. As you move in every direction with your animated avatar, you’ll need to avoid nature’s most dangerous elements and other hazards. The action ramps up through every stage, so we implore you to stretch out your fingers for some fast moving pushing, collecting and climbing.

This might just be one of the brighter Minecraft inspired mobile shooters we’ve ever played. Pixelfield may have the welcoming color scheme of a Care Bears episode, but trust us when we tell you this – there won’t be a lot of hugging on going on here. Pixelfield is an online competitive FPS that features a multitude of guns, maps and avatar skins. On the playable modes front, there’s one that focuses completely on capturing pigs and dropping them off in their farm base. Besides that, you’ll be mowing down zombies on your own or human foes during some good ol’ rounds of Deathmatch. Pixelfield is simple and sour (in such a good way). 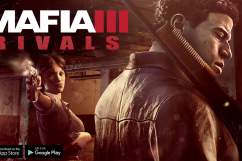