March 21, 2017 – a Tuesday that will be celebrated globally by Mass Effect fans.

BioWare has taken the time to make sure Mass Effect: Andromeda is the proper reboot after its space-faring trilogy concluded. After spending time with Commander Shepard and his crew across three games, Mass Effect fans will don the armor of a new galaxy explorer – Scott or Sara Ryder. With the release of this massive action RPG comes a host of other special collectibles. We realize that fans of the franchise look for anything and everything that represents one of Electronic Arts’ shining beacons.

If you’re looking to obtain any action figures, strategy guides or any other collectibles devoted to Mass Effect: Andromeda, you’ve come to the right place.

We’d be way out of line if we didn’t mention the actual physical edition of Mass Effect: Andromeda in a list devoted to the game. The Deluxe Edition features a wide range of extra DLC for your gender specific Pathfinder – a casual take on the Pathfinder costume, a Scavenger Armor set, the Pathfinder Elite Weapon set, a Pet Pyjak (which is modeled after a monkey), the Multiplayer Deluxe Launch Pack and access to the Digital Soundtrack. On top of all that, recipients of the Deluxe Edition will also be given the Nomad Character Skin, the Multiplayer Booster Pack and the Deep Space Explorer Armor. Now if you want a few extra Multiplayer Booster Packs, then you’ll need to step up and nab the Super Deluxe Edition. Note that that aforementioned edition of the game can only be obtained through the first Friday after release (March 24).

Mass Effect: Andromeda is massive. Understatement of the year, correct? To no one’s surprise, a strategy guide carefully curated by Prima has been created for BioWare’s next RPG epic. This Collector’s Edition of the guide has step by step walkthroughs of the game’s most important missions. It also includes illustrated maps, character profiles, battle strategies, explanations of items and tips for multiplayer. The portion of the book that makes it a Collector’s Edition lies in its DLC code for a Multiplayer Booster Pack and some extra insight from the developers at BioWare.

The 2nd strategy guide that’s perfect for Mass Effect: Andromeda fans is the Pathfinder Edition. This hardcover tome includes everything we already mentioned for the Collector’s Edition of the guide. But this book’s bigger price tag is well warranted because it comes with several physical bonus items. Getting this guide means you’ll be rewarded with a special “Andromeda Initiative” backpack, a Welcome Letter from one of the in-game characters, a full-color map of the Andromeda Galaxy and a 32-page Field Journal. That personal journal will take you back to the days of writing all your notes for a game in the back of its instruction booklet.

4. The Art of Mass Effect: Andromeda

Comic book publisher Dark Horse knows how to put together a video game art book. We’re more than pleased with the fact that they’ve partnered with BioWare to do the same for Mass Effect: Andromeda. This art collection features never-before-seen-art that displays the game’s characters, vehicles, arsenal, locales and even more of everything you’ll discover during your initial playthrough. Mass Effect: Andromeda’s universe and the people exploring it are broken down perfectly within the pages of this art book.

Buy the The Art of Mass Effect: Andromeda book here.

Big gaming franchises like Halo, The Witcher and Gears of War expanded their universe with novels. The same process is being applied to Mass Effect: Andromeda with a book entitled Nexus Uprising. Authors Jason M. Hough and K.C. Alexander have combined their expertise within the area of fictional books to craft an official tie-in for Mass Effect: Andromeda. This is actually the 1st of three novels that will explain even more of the most important individuals, organizations and events within Mass Effect: Andromeda.

You know what’s become a thing over the past few years? Adult coloring books. And we’re totally cool with that. Anyone who’s already passed the age of a toddler should still have the ability to act out their artistic desires. An adult coloring book has been created for Mass Effect: Andromeda, so the more artistically inclined followers of the franchise can make the images inside it look even more gorgeous. After you turn off Mass Effect: Andromeda, it’s best to relax and color in a few lines for a few hours afterwards.

When you set foot onto any of Mass Effect: Andromeda’s planets, your main vehicle for the road is the Nomad ND1. BioWare and Electronic Arts partnered together to produce an official replica of this in-game vehicular explorer. The Collector’s Edition Diecast Nomad ND1 is as authentic as it gets. It comes outfitted with a pop-up drone, doors that open and a control panel that actually lights up. The SteelBook case for the game that comes with this device is a nice lil’ bonus as well. Make sure you have three AA batteries on hand if you’re hoping to bring the Nomad ND1 to life.

Now when it’s time to take off from the ground and plot the next part of your journey, Mass Effect: Andromeda provides the perfect spaceship to handle that task. That main source of travel is the Tempest, a ship that resembles the legendary Normandy from the original trilogy. The Tempest’s sleek design comes to life in the form of this officially licensed replica. Mass Effect collectors who need a side by side companion for their Nomad ND1 have to look no further. Placing this Tempest Ship replica nearby compliments that mega space tank quite well.

Commander Shepard’s work has come to a fitting conclusion (we know that closure wasn’t quite fitting for some, though). Mass Effect: Andromeda’s new main protagonist will either be Scott or Sara Ryder, who are a pair of twins that embark upon a new journey. After selecting who’ll represent you in-game, you’ll spend hours upon hours working to see the “Andromeda Initiative” to completion. Plus we’re sure you’ll come to love your new galaxy-faring savior during that mission. The best way to show your love for either hero is by getting their respective action figure. Both models come in at 7-inches tall and are incredibly detailed. McFarlane Toys knows a thing or two about crafting amazing looking statues and action figures. They’ve done right by Mass Effect: Andromeda with these two slick figurines.

You all knew Funko was going to create a new line of Pop Vinyl figurines for the new Mass Effect saga. If you have enough room within your Funko Pop filled closet for more, then these new Mass Effect: Andromeda dolls should become a part of your collection. The full list of figures devoted to this new blockbuster game are as follows – Peebee, Sara Ryder, Jaal, a member of the new alien Kett race, Liam Kosta and a special masked Sara Ryder with full armor. 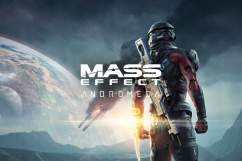 You can also check in here if there’s any other Mass Effect related goodies you’ve been searching high and low for.