Each player will compete for a prize pool that is segmented with the earnings going towards charities of their choice according to ESPN.

O’Neal will support the Odessa Chambliss Quality of Life Fund, which was formed to give scholarships for those looking to pursue a career in nursing. Fiasco will support his own foundation M.U.R.A.L. (Magnifying Urban Realities and Affecting Lives). Reggie Bush will give his winnings to the 619 Charitable Fund and Marie will donate to the American Cancer Society.

O’Neal has strong ties to esports already. O’Neal is an investor in an esports team called NRG Esports which was founded by Sacramento Kings co-owners Andy Miller and Mark Mastrov. Former MLB players Alex Rodriguez and Jimmy Rollins are also investors in the team.

Shaq and his Inside the NBA co-host and NBA Hall of Famer Charles Barkley competed in a Street Fighter V match earlier this month, well, sort of.

According to ESPN, the celebrity tournament will follow a playoff-style bracket with two semifinals which will then seed into a final. ELeague Street Fighter V Invitational  hosts Richard Lewis, Steve “Tasty Steve” Scott and Stephen “Sajam” Lyon will provide analysis and commentary throughout the event. ELeague Street Fighter V Invitational airs every Friday at 10 p.m. ET on TBS and 6 p.m. ET on Twitch, YouTube and ELeague Live.

Fiasco competed in an exhibition match versus fighting game legend Daigo Umehara last February in promotion of the release of Street Fighter V. Umehara holds a world record of “the most successful player in major tournaments of Street Fighter” in the Guiness Book of World Records. Fiasco won the match three-to-two but man fans wrote it off as being ploy for the upcoming release of Street Fighter V. An article by PVP Live thinks Fiasco is for real and a good asset to the community. Fiasco hopes there is more exposure to fighting games in the future according to a statement to ESPN..

Profession wrestler Natalie Eva Maria says her and her husband fight with one another about video games quite often, she told ESPN.

On any given night, you are likely to find me and my husband on the couch battling it out over a videogame. It’s something we enjoy doing together, so I jumped at the opportunity to show my skills during the Street Fighter Celebrity Showdown.”

The event is the first celebrity tournament for ELeague, now in its second season. The first season of ELeague broadcast Counter Strike: Global Offensive matches but this season has focused solely on Street Fighter V. 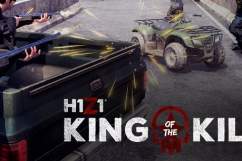