This week has been quite the treat for fighting game fans, especially those who are hype for Marvel vs. Capcom: Infinite.

Just this past Tuesday (April 25), Capcom dropped a brand new cinematic trailer that revealed the game’s main antagonist and a host of new roster additions. Turns out that that wasn’t the only bit of surprising info/footage to come out of the MVCI camp – a gameplay trailer just landed in the laps of all us needy fans. Lucky for you, we spent some hands-on time with the crossover fighter and came away with some extra details. By the end of this preview, you’ll have a better understanding of what Marvel vs. Capcom: Infinite has to offer for fighting game newbies and experts.

We’re about to break down the game’s newly introduced Infinity Stone, special move/combo inputs, Ultron and more down below.

We do know of two Infinity Stones that were revealed last December – the Power and Time Stones. Now there’s another powerful Infinity Stone that can be added to that list – the Space Stone. Upon activation, it sucks in your opponent and immediately closes the gap between both characters. This stone will play a huge part in helping fighters who have a hard time getting in on more projectile-based foes. For example, Thor’s grapple super move becomes so much more easier to land once you bring your opponent closer to you via the Space Stone.

Once fully powered up, the Space Stone’s super move encloses your rival within a box and relegates them to mime artist status. They can still fight back, but it’s much harder to do so since your box keeps them stuck in one spot and susceptible to a combo assault of epic proportions. Filling your Infinity Stone meter is done by getting damaged or actively using your Infinity Stone’s special ability.

During our demo, we also took some time to experiment with combos and teammate cross-ups via the Time Stone. While using Ultron and Captain Marvel for instance, we were able to start a combo with Ultron, activate the Time Stone to slip behind our opponent, call in Captain Marvel to lend a hand then finish off our victim with Ultron on the opposite end.

As for the Power Stone, it does a good job of increasing the devastation that smaller characters like Chun-Li can dish out. Bouncing your foe off of the wall and keeping them airborne enough to land her midair super is a legit strategy. In the hands of powerhouses like Hulk and Thor, the Power Stone becomes something even scarier. You’re going to be doing a lot of pre-planning at the character select screen as you decide which Infinity Stone benefits your squad the most.

Imagine our surprise when we spotted Ultron as a playable character on the Marvel side. When it came time to put him through the motions, we came away impressed. Ultron is a jack of all trades – he can send out fellow androids to do his bidding, emit laser beams up close or at a distance and pull off a slick mid-air grab. He’s definitely going to be a force to be reckoned with. Captain Marvel has already become a favorite of ours as well. She’s capable of pulling off grabs of varying strength, power herself up and adopt a cosmetic hair change and send out a powerful hand beam as a super move.

Mega Man X is just as cool as the other two characters we just mentioned. After pulling off a charged shot, he can jump right into another maneuver just by the press of a button. Watching him slide in after a charged shot or choosing to land a dashing attack instead looks even sweeter in motion. Mega Man X can also don two of his special armors during super moves. His Capsule Armor stays around for a little while after activation, while his Ultimate Armor sticks around only during the super move associated with it.

Some of the returning cast mates from Ultimate Marvel vs. Capcom 3 come back with new moves or a visual change up. Chris Redfield still favors his Resident Evil 5 gear, plus Chun-Li, Hulk and Thor still look the same as they did before. However, Hawkeye ditches his past getup for the more modern costume he’s recently been donning in the comics. Strider is now able to dish out a brand new mid-air super combo that’s slash heavy, plus Chun-Li’s midair super from the very 1st Marvel vs. Capcom returns. You’ll be able to test out each character’s moveset within the game’s Story (which is around 2-hours in length), Mission and Training Modes. There’s also a Collection mode for hardcore gallery enthusiasts. What’s even cooler about that Collection Mode is the fact that Dr. Light (Mega Man) and Tony Stark are the brains behind that operation.

Hulk and Thor show up with even more powerful Level Three super moves now, which can be seen in the latest gameplay trailer. Thor can also charge up and send his hammer flying across the screen, while Iron Man can now launch a Smart Mine and Repulsor Array attack. Hulk obtains a new wall jump and dashing special move, while Captain America gains the ability to counter opponents with his shield and throw it upward.

Ryu sticks to his tried and true playstyle, but Morrigan changes things up by adding a new air projectile to her repertoire. While airborne, she can call out a quick spike of some sort and aim it downward at her enemy. Strider still calls upon the aid of his robotic animals to assault you and Chris Redfield still plants mimes while dishing out attacks via his varied arsenal. Chris and Hawkeye do make an interesting rushdown/keep away duo with the Time Stone equipped. Each familiar roster member returns with new and old mechanics to master all over again.

It’s been made clear to us that this latest entry wants to break down the difficulty barrier even more for newcomers. One of the ways that’s being done is through the addition of Auto Combos. Just by tapping the Light Punch button, any character can dish out a combo that leads into a launcher, goes into an air combo (Aerial Rave) and ends with a midair knockdown. Another easy to pull off combo is activated by starting with the aforementioned button and hitting every other button counter-clockwise. So for example, you’d start this new combo with Light Punch, Light Kick, Heavy Kick and Heavy Punch.

This fighter’s universal control scheme sticks to four attack buttons (light and heavy punches and kicks, one button for switching characters and one for Infinity Stone activation). Also, special moves have become much easier to activate now. For example, planting down one of Chris Redfield’s mines or launching into Morrigan’s Shadow Blade uppercut occurs after a Down, Down, Punch input. No need to freak out too much about this, though – traditional command inputs are still intact. Ryu’s Shoryuken (Dragon Punch) controller motion remains the same for now.

Thankfully, air combos (the Aerial Rave) and the Advancing Guard mechanics are still present. Picking up your opponent off the ground with a crouching attack is something you’ll see a lot off, too. The lack of a 3rd partner and assist attacks worried us at first, but we’re more at ease now. The Infinity Stones do a great job of replacing that 3rd character by giving you more interesting playstyles to connect with. Assist attacks have been replaced by partner call-in combos that are just as flashy as the ones seen in the game’s predecessor. You have the ability to call in your partner more than once during a tag team combo, plus you can swap them out at the beginning of another character’s super move. Note that the special meter now maxes out at four full bars.

If your active team member is getting battered, you can now pull off a Counter Switch (which costs two bars of your super meter) to bring in your other character. This makes the call-in partner the current active member; this leads into you fending off your opponent and giving your near-death character a chance to escape further punishment. That mechanic and the others we spoke of do an awesome job of making Marvel vs. Capcom: Infinite just as chaotic and fun to play as UMVC3. We certainly enjoyed the early build we got to play and came away impressed. While the game’s visuals (which are less comic book inspired and more reminiscent of Marvel: Contest of Champions) got a mixed reaction from fans, we’re still confident that the gameplay itself will make up for it. 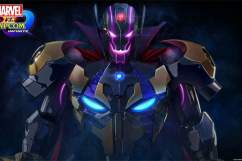