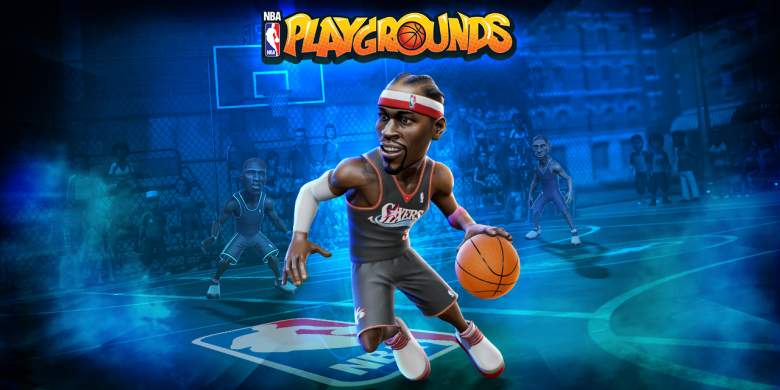 Reviewed on Nintendo Switch with a copy provided by Saber Interactive.

It has been a long time since we’ve had an arcade-style basketball game in the vein of NBA Playgrounds. The game feels like a clear callback to the ’90s when we had the high-flying tomahawk dunks that the NBA Jam series has come to be known for. We haven’t had an NBA Jam game since 2010 so someone had to pick up the slack and that is NBA Playgrounds.

Playgrounds is a fully licensed NBA game and includes players of past and present. We have current players like LeBron James and Stephen Curry along with long-retired players like Magic Johnson, Wilt Chamberlain and cover athlete Allen Iverson. We have a good mix of ballers from yesterday and today and the game plans on adding more players post-launch to further flesh out the roster. 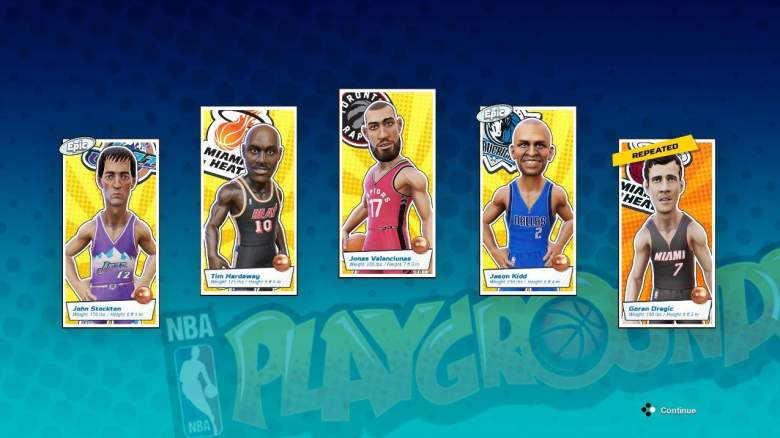 Instead of the usual 5-on-5 you’d see on a normal NBA court, Playgrounds makes it 2-on-2 and features hundreds of dunks and moves. This definitely isn’t NBA 2K and that’s not a bad thing.

The first thing you notice when you boot up is the delightful ’90s sounding soundtrack. It quickly gives off that old-school nostalgia feeling vibe. You’ll be prompted to open up character packs, which is how you build your roster. As you gain experience through playing games, you’ll unlock additional card packs.

Each NBA team has a healthy representation with the Pelicans having the least characters with three and the Nuggets (?) having the most with eight. You are able to mix and match players from different teams and different eras to play with the squad you want.

Compared to most games today, the visual quality seems to be lacking. We’ve only tested the Nintendo Switch version and the character models seem to have jagged edges and mostly look like they are from last-gen. The visuals could be improved on the Xbox One, PS4 and PC and we’ll do some further testing to let you know if that is the case. 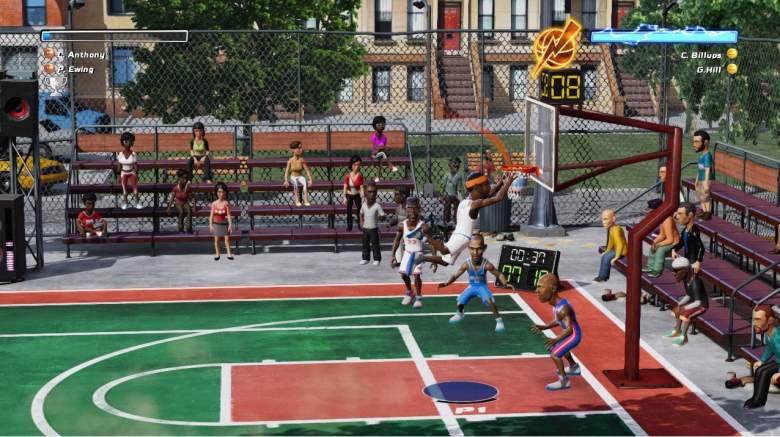 While playing undocked, it does appear like it is outputting in a lower than HD resolution. Once you dock the Switch, it looks tad bit better but it’s not a huge leap in quality.. It’s disappointing to see these kind of visuals in 2017 but they don’t detract from the gameplay. In a game like this, you probably value the performance over the visuals and we’re pleased to say I haven’t noticed many issues. There seems to be some slowdown while in-bounding the ball and the load times can chug but all in all, it runs like you’d expect. While playing in handheld mode, you are more prone to stutters and slowdowns versus the docked mode.

The gameplay is top-notch, Saber has really nailed the old-school NBA Jam style. I would have liked it to be more fast-paced but it was never an issue.

There aren’t really any rules on the court once the game starts. You are free to swipe, shove and elbow your opponent. It’s pretty much anything goes which encourages some rough housing. You can even hit some 4-pointers if you release the ball at the right time, the same goes for 3-pointers for dunks. This truly is an arcade experience. I’ve found it is just as much fun launching 3-pointers from half-court as it is touching the sky on a dunk attempt. It is a little unsettling to see Dwight Howard hit 4-pointers though.

From my experience, the best teams feature a big man along with a perimeter shooter. I liked to run with John Stockton and Patrick Ewing but I’ve also made Ben McLemore and Chauncey Billups work. You can really rain down the threes but it is pretty difficult to get the perfect releases. Picking up rebounds is a nightmare with a guard too so keep that in mind. 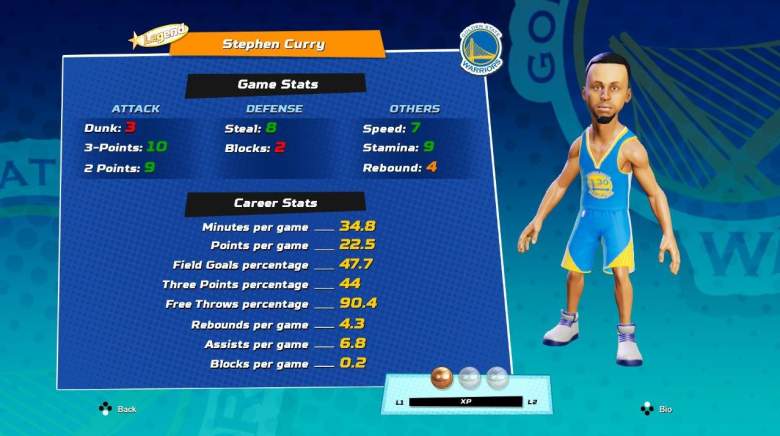 The players are rated on several abilities including:

A player with a high dunk rating will be able to pull off some high-flying insane dunks while a player with a low dunk rating, like Derrick Rose, will usually settle for lay-ups, which are still spectacular looking. As you play the game, a meter will fill up and the ball with turn into lightning, pretty much guaranteeing whatever you put up will find the bottom of the basket. The controls definitely take some getting used to and it takes some time to learn the more complex moves like alley-oops. I also had trouble mastering the art of the rebound, something about jumping toward the ball wasn’t working for me. It is extremely satisfying once you learn how to time your jumps to swat your opponents shots in oblivion.

The game comes with three modes: Exhibition, Tournaments and Online Match. Unfortunately, the online portion is not available for the Nintendo Switch at launch so we weren’t able to test that out. It does feel a little light on content. We only finished the New York tournament, but once you finish up all the tournaments, we’re left with normal exhibition matches. This can cause the game to feel stale over time. The online mode will be able to remedy this once it hits. Strangely, we’re only able to play 1v1 matches online and we don’t have the option to run 2v2s just yet.

The commentary is fresh at first but quickly becomes repetitive. You’ll hear the same phrases over and over throughout a game which can become annoying. If you like stealing the ball, be prepared to hear the same commentary continuously.

For a $20 price tag, you really can’t ask for much more. NBA Playgrounds is an arcade basketball game at heart and it doesn’t set out to do much more. It feels like a game you can just pick up and play for an hour or so and move on to something else. That’s not any fault of the game because it is a budget title. The budget aspect shows especially in the visual department.

Once the online mode is up and running, I would imagine this game will feel a lot better. It can get boring playing against the AI rather quick so having some human players to play against can breathe some life into this game. 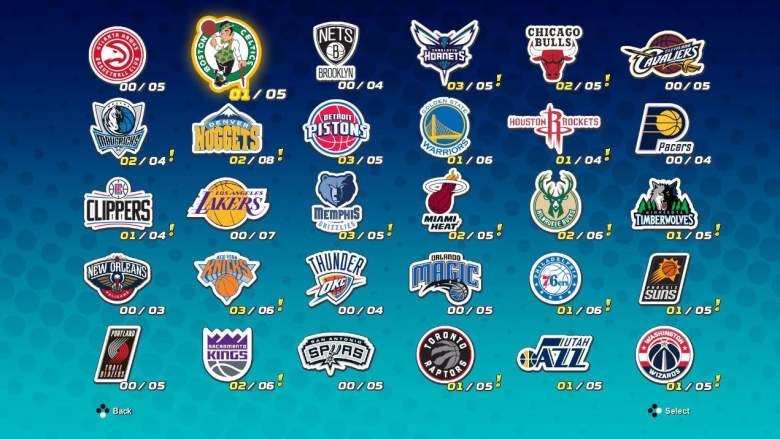 NBA Playgrounds goes out to create the best arcade-style basketball game you can find on the market today but it doesn’t do much else to go above and beyond. It’s not a bad game but it’s not great either. If you’re a fan of this style of basketball, I say go for it.