Minecraft is one of the biggest games ever, and with that comes with one of the largest communities ever. From mods to fanfiction and more, people are finding interesting and unique ways to be a part of their favorite game.

One of the biggest contributions to the community are videos about the game. Here are five fan-made videos about Minecraft that are worth your time.

YouTuber PeanutButterGamer is best known for his series of longform comedic videos of various video games. However, he also has a very successful let’s play channel. And by far the most beloved series on that channel is his Hardcore series.

The premise of Hardcore is that PeanutButterGamer and a bunch of other YouTubers and friends set out to complete the main quest of a game. The catch is that if a person dies, they’re out for the rest of the game. The rest go along until either they complete the quest or they all die.

It’s pretty much a live and more genuine version of something like The Walking Dead, zombies and all. In between the threat of death, everyone on the team is all goofing around and bonding with each other. And when they inevitably die, it’s all the more heart-wrenching. Seriously, for all the silliness that goes on, some of the deaths in Hardcore are really sad. Everything is accentuated by the impeccable editing, which use music and special effects at just the right moment to really drive the mood.

PBGGameplay has five seasons of Hardcore for Minecraft, though I recommend the fifth one as that has the best production values and most memorable moments. He also has Hardcore seasons for other games like Terraria and MineZ.

There are tons of musical parodies of Minecraft, but few are original songs. Enter YouTuber Brentalfloss, who does a brilliant job of summing up the appeal of Minecraft in a one and a half minute song. Describing it here would only spoil the experience, so take a look for yourself.

Brentalfoss has many other musical spoofs of video games in his extensive “With Lyrics” series, taking the melody of a popular video game song and adding lyrics that both celebrate and lampoon the game.

This video recreates the opening sequence of Disney’s The Lion King but with the mobs from Minecraft. Watching this video side by side with the original, its amazing to see just how much this video gets right. The setting, camera angles, character acting, and original a cappella music are all spot on. It’s impressive in how authentically it recreates the mood of the original movie.

The series is so well known, in fact, that the voice of the villager was featured in an April Fools update to the actual game in 2014 where the voice replaced the sound of the mobs and music. The update can also be accessed by downloading a mod.

If that doesn’t prove its prominence, I don’t know what does.

Hardcore Henry meets Minecraft Hardcore in this fan film. The first-person perspective mends beautifully with the special effects to create a surprisingly intense yet humorous take on what Minecraft may look like in real life. Personally, I think this should be a new feature. Augmented reality, anyone? 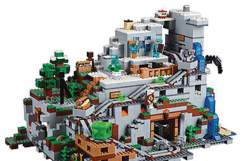