In the upcoming Super Mario Odyssey for the Nintendo Switch, Mario can don many different costumes in addition to his iconic jumpsuit. Eagle-eyed players have found that many of his costumes actually reference games that he’s appeared in.

The Mexican outfit is actually quite obscure. The outfit comes from the 1990 Game Boy adaptation of the 1981 arcade game Qix. If the player receives a certain score and then loses the game, Mario will show up in a scene set in different parts of the world. Getting between 50 thousand and 149,999 points will show a scene with Mario wearing the Mexican outfit while playing a guitar in the desert. You can also see Mario holding a spear in Africa, bullfighting in Spain, charming a snake in front of the Taj Mahal, juggling dishes in China, marching with guards at Buckingham Palace, and in Peach’s Castle in the Mushroom Kingdom with Peach, Luigi, and a bunch of Toads.

During the second day of the Nintendo Treehouse livestream during E3 2017, they showed Mario buying the builder outfit he wore in Super Mario Maker at a store in New Donk City.

Super Mario Odyssey has shops where you can spend coins to buy items. Yellow coins can be spent at any shop but there are also purple currencies unique to each world used only at the shops of said world. In addition to costumes, you can buy power ups like the Life-Up Heart which raises your max health.

The game is launching October 27, 2017 on the Nintendo Switch. 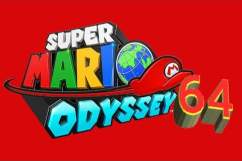