So Fire Emblem Heroes units in swimsuits are popular. Who knew? They’re so popular, in fact, that there are brand new swimwear-clad heroes in the game from the Nohrian Summer summoning focus. The new heroes are part of a massive list of updates revealed in the game’s recent Feh Channel video.

Due to their limited nature, they’re highly collectible. But are they actually worth summoning? Read this in-depth guide to find out.

Thanks to GamePress for providing me with much of my research.

Summer Elise is one of the best green mage units in the game. However, that may be owed to the fact that her stats are similar to one of the best green mage units in the game, Nino. She has the highest attack stat of all the green mages and is tied with Delthea and Mae as the second strongest mage in the game. She also has an excellent speed stat, which combined with her attack make her a scary magic attacker that can KO even red units with low resistance. However, like her green mage counterparts, she has low HP and defense with only an acceptable resistance stat, making her very fragile. She also faces a lot of competition with speedier mages including Nino, meaning she’s not as effective at making follow-up attacks and preventing opponents from making their own follow-up attacks against her. Nino also comes standard with a “blade” tome, which is one of the most useful tomes in the game as it boosts damage if you have buffs. Overall, Summer Elise is a great offensive mage who can take down high defense yet low resistance opponents for your melee allies.

The Hibiscus Tome+ has the same effect as all the other Nohrian Summer weapons. It’s actually pretty useful as it grants allies within two spaces of Elise one extra attack and speed point during combat, which is useful for offense-oriented teams. However, to take full advantage of her stats, you should consider having Elise inherit her own Gronnblade+. Rally Attack/Resistance is great for boosting allies especially if you have other strong mages on your team so you can keep that. The special skill Draconic Aura boosts her already monstrous attack. Inherit Life and Death as it’s great for glass cannons like Summer Elise as it boosts attack and speed at the cost of defense and resistance. Death Blow is a good option too as it boosts attack but only if you initiate battles. Add Desperation as it allows her to attack and then follow-up without the opponent countering first. Fury is also great as it boosts all your stats and the damage you take from it can put you in the HP threshold to activate Desperation. Finally, add a buff skill like Hone Speed to help your teammates secure take downs and protect you from harm.

Summer Elise is best with a positive IV in attack or speed to boost her potential as an attacker and a negative IV in HP or defense as they’re low already.

For teammates, grab someone who can buff Elise to maker her even more scary, especially if she has Gronnblade+. Elise also works great with blue mages that work off her buffs and cover her weakness to red enemies like Ryoma. She also works well with strong attackers who can take down opponents with high resistance.

Like his horse riding counterpart, Summer Xander boasts big defense and HP as well as a respectable attack stat. This makes him a bulky unit that can not only take damage but dish it out as well. Unfortunately he also carries over the low resistance from his counterpart, making him vulnerable to most mages in the game. And while his speed stat is much better, it’s only slightly above average making him susceptible to enemy follow-ups.

Bonfire is a good special skill to keep as it boosts attack with his great defense stat. Fire Boost is good as it boosts your attack if you have at least three more HP than the enemy at the start of combat which is easy since Xander has a lot of HP. However, you may want to consider giving Xander Armored Blow to boost his defense every time he initiates battle, making him a more effective tank. Infantry Pulse lowers the special cooldown count of your infantry allies’ special skills at the start of the first turn so long as they have 5 HP less than Xander. It can also stack with other units with the skill. This is perfect for any allies with special skills that already have low cooldowns such as the powerful Moonbow or allies with “brave” weapons who can burn through the cooldown quickly. It’s also great for making skills with high cooldowns like Aether usable, as suggested by buttcheeksontoast on Reddit. His Lilith Floatie+ is good for boosting allies, but you could swap it out with the powerful Brave Axe to up his kill potential and work off of his decent speed. His B slot skill is flexible, but good candidates include Quick Riposte to help counterattack enemies and make him a stronger tank as it allows the user to make a follow-up attack if attacked at over 70 percent HP. Then just add Reposition to help move teammates around the battlefield or get them out of a compromising position and you should be good to go.

Xander appreciates a positive IV in defense to help him tank better or speed to help him make follow-up attacks and defend against them. He can take a negative IV in resistance as it’s already low to begin with.

Pair him with allies with special skills with low cooldowns so they can take advantage of his Infantry Pulse. He’ll also appreciate the company of high resistance attackers who can take down mages.

Summer Leo has the strongest resistance out of all of the mages and is tied with Felicia, Jagen, and Lucius as the second highest resistance in the whole game. This combined with his red tome and good attack makes him a great counter to green mages popular in the metagame. Unfortunately, his average speed and low defense means that he’s vulnerable to every other kind of unit. Never the less, he’s still a good option if you want a versatile support mage unit to help defeat opponents.

Seal Resistance is a keeper as it softens up opponents for your other mages to finish off. Iceberg is also a great special skill to keep as it boosts Leo’s attack based on his monstrous resistance. Attack Ploy is also great as it reduces the attack of all foes in the cardinal directions of Leo who have one less point in resistance than Leo’s huge resistance stat, though it’s also useful to have a buff skill to support teammates directly. Your A slot skills are pretty flexible, though Fury is always useful for boosting all stats at the cost of taking extra damage every turn. Your Tomato Tome+ is great for boosting allies and pairs wonderfully for whatever “rally” skill you give him, though you can also try giving him Rauorraven+ as it provides weapon advantage against powerful colorless units and works wonders if you inherit Triangle Adept which boosts your advantage. You can also inherit Rauorowl+ from Katarina as it boosts your stats if near allies, which you’ll find yourself doing a lot as a support unit.

A positive IV in resistance and a negative IV in defense is a no-brainer.

He supports just about any unit, though blue physical tanks with low resistance like Effie or Ephraim will appreciate him the most for his ability to defeat green mages. He also pairs well with green mage allies to cover his weakness to blue mages.

Instead of transforming into a dragon, Summer Corrin (F) rides one to battle. Her speed is great and while her attack is initially decent, her status as a flier makes her eligible to receive powerful buffs that affect fliers. Corrin with a neutral IV and a Hone Flier buff will take her attack of 31 and speed of 34 to 37 and 40 respectively, which is absolutely monstrous and makes her the best unit to inherit Blarblade+. She can also cross any kind of terrain as a flier. However, her low HP and defense as well as her mediocre resistance ensures that she won’t stick around for long, especially against bow users who do extra damage against fliers. She also can only reach her full potential if you have a unit with Hone Fliers buffing her.

Her base skills are already pretty useful. Swift Strike boosts her speed and resistance if initiating combat and Fortify Fliers will boost the defense and resistance of flier teammates giving you buffs. Her special skill of Dragon Fang is also very effective as it boosts her attack. If you want to take her to the next level, however, consider giving her Life and Death, Desperation, and Threaten Resistance to lower the resistance of opponents within two spaces to make them even easier to kill. Also consider replacing Dragon Fang with Moonbow as it has a quicker cooldown and ignores 30 percent of the enemy’s resistance. Then give her Ardent Sacrifice to help her reach the HP threshold Desperation while healing teammates.

Corrin is fantastic with a positive IV in attack or speed boosting her fighting abilities. She can take a negative IV in defense.

A flier unit with Hone Fliers is a near-requirement, though she works well with any unit that can buff her attack or speed. Dancers are also useful for giving her extra turns as well as “raven” tome users who can destroy bow users and armored units.

The Nohrian Summer heroes are debatably better than the Ylissean Summer heroes, with better stat spreads and synergy with skills, weapondry, and teammates as well as better base skills. However, just like with the Ylissean Summer heroes, they still need a lot of investment in order to truly shine. The big winner in this summoning focus is Summer Corrin (F), with her ability to receive flier buffs, mobility, and devastating capabilities despite poor defenses and a weakness to bows. The great heroes on offer combined with their exclusivity makes this summoning focus absolutely worth summoning from. Focusing on blue and green orbs is recommended as those will earn you Corrin, Elise, and Xander.

For a guide on the Ylissean Summer heroes, click the link below. 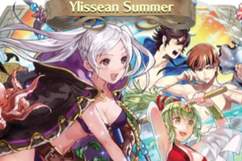