Splatoon 2 released last week and has been a hit with many players, both new and old alike. Splatoon 2 took what was great about the original and built on it with this sequel. While a lot of the mechanics remain the same, there are new features like the Salmon Run mode and the new weapons and gear.

While you are splatting or getting splatted by the new weapons, you might want to know of a way to get back into the action quicker and get back to inking the ground. While you can take your gear and put on the perks to allow for a quicker respawn or you could just respawn on your fellow inklings instead.

The way to do this is quite simple but it isn’t really explained all that well, or at all, in the game. Next you are splatted, try hitting X while you are waiting to respawn. If you’ve done that correctly, you should be looking at a screen similar to this that shows your map and your teammates.

You’ll notice that the members of your team have D-pad icons next to their names. You can choose where to respawn by choosing a teammate. In this instance, I have chosen the right D-pad option. You can see a circle on the map where I’ll be shot to once I respawn if you look next to my teammate Rhino.

By selecting that location, I have chosen that to be my respawn point. If you’ve done this correctly, you will be sent there upon respawn.

Once you come back at the initial spawn point, you’ll immediately be propelled into the air and land where your circle was placed. This will allow you to get right back into the combat, assuming your teammate isn’t being mowed down as you spawn on them. It’s important to pay attention to what your teammate is doing if you want to make the most out of your life.

We hope you don’t have to use this method very often because we’d rather you force other players to use this method instead. However, on those rare occasions when the enemy gets the jump on you and you’re forced to respawn, you now know of a way to get back into the action and take your revenge quicker. 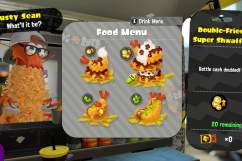 Read More
Nintendo Switch, Splatoon 2
Back into the fray.