The Travel Medallion is an important new item introduced with The Legend of Zelda: Breath of the Wild. The item will give players the ability to set a warp point anywhere on the map, which will make it possible to warp to a place that isn’t a shrine, which is nice way to get to different places.

When you get the Master Trials DLC downloaded, the first you’ll notice when you boot up your save file is a bunch of new quests popping up. You’re going to be interested in the EX Teleportation Rumors! quest if you want the Travel Medallion.

The quests says to check out the South Akkala Stable so that is where we’ll be going to begin this quest. Once you get there, you’ll find a book of rumors inside on the table. Reading this book will then point you to the Lomei Labryrinth Island. This island is better known for the Tu Ka’loh Shrine, home of the Barbarian Helmet.

If you’ve been there before, you can just teleport to the shrine. If you haven’t been there before, you’re going to have to brave the maze. Once you finish the maze and clear the shrine, you can drop down the hole and you’ll see a ton of guardians. Many of these guardians are rusted away but some will wake up and target you, if you run to the far end of the room, you’ll see a chest that wasn’t there before if you’ve already cleared the shrine. This shrine contains the Travel Medallion.

The medallion will allow you to go to any location on the map and make it into a waypoint. However, you can only have one waypoint active at a time and creating a new one will overwrite the old one. For those hoping to create multiple warp points at the tops of mountains, you’re out of luck here. 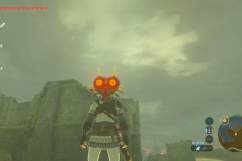 The Legend of Zelda: Breath of the Wild – Where to Find Majora’s Mask