Luminosity Gaming won the PlayerUnknowns Battlegrounds Invitational. Over four days Luminosity Gaming outperformed every other team as the event; both individually and as a team. Luminosity had a fantastic performance in the Squad games especially. Their recovery of the downed members of their team was critical in one of their first place victories. Throughout each day I noticed a lot of techniques that each team seemed to employ that were not readily apparent to the average player, let’s get into what I saw;

When In Doubt, Create Your Own Cover

This was probably the most fascinating tactic that a lot of Squads used. A lot of teams drove the vehicles they found (usually a UAZ) right to where the rest of their squad was and then they parked the vehicles to build upon the existing cover. It was something that understandably simple but not anything I would have never thought of before I watch this event. Using vehicles as cover does come with the inherent risk of your opponents blowing them up; but it’s worth the risk if your team has vehicles close by and had no other options available. This kind of resourcefulness was a hallmark of the entire event.

This was something that seems like such a simple idea but it had honestly never occurred to me while playing. A lot of the teams at gamescom usually operated in smaller groups of two. This seems to be a better system than grouping as four; if one group of two gets overwhelmed the whole squad doesn’t get killed. It’s important that each pairing stay relatively close to one another. Reviving downed teammates is critically important in squad mode.

Above All Else, Eliminate Your Opponents. The Best Loot Is In Someone Else’s Crate

A lot of people who play PUBG tend to timid, I am definitely one of those people. Players tend to hide a lot and all of the conflict is centered on the later stages of the game. The only exceptions are usually Military Base and School. At gamescom anytime one squad spotted another they quickly assessed the situation and engaged. It was chaotic but being fearless let each squad get all the loot they needed, each player was frequently trading damaged helmets and armor for gear from dead foes.

I loved gamescom as a whole. I really enjoyed each day of the event and I sincerely hope this is the first of many PUBG tournaments in the future. 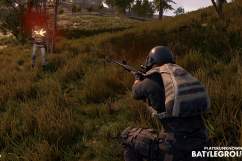