Struggling to get through Mario + Rabbids Kingdom Battle’s toughest challenges? Want to get a better performance rating? Well look no further because with some help from Ubisoft were giving you 15 tips and tricks you need to know.

1. Always Try to Hide Behind Cover

Always try to hide behind cover if possible. Your characters can be defeated easily if they’re exposed. The only reason you would want to move out of cover is when you want to get closer to an enemy for a final blow.

The Tacticam can be accessed during your turn with a press of the x button, offering a bird’s eye view of the battlefield. It also reveals the abilities and location of enemies, even those hiding underground. If you highlight an enemy and press the Y button, you can see the range of their movement and whether or not they’ll be able to reach your hero. You can also switch to your ability and then activate tacticam to see the range of said ability. You can also use the Tacticam to plan your route for missions requiring you to reach the end of the map.

If you’re close enough to enemies, dash into them. Dashing doesn’t cost any movement range and does a guaranteed set of damage which can quickly add up. You can also increase your dash damage in the skill tree menu in the Battle HQ.

Every single character can unlock the Cleansing Jump in the skill trees menu, which cures any status effect of allies if you perform a team jump with them. Unlock it as soon as you can.

Also remember that the team jump is always the last part of a movement chain, which means you cannot enter a pipe or dash afterwards.

5. Attack from High Ground Whenever Possible

Attacking from high ground above your enemies improves your line of sight and deals more damage. Keep an eye out for pipes in maps that can send you to higher ground or use the Team Jump to reach it.

6. Be Aware of How Much Damage Your Cover Takes

Cover disappears after taking enough damage. For brown blocks, they’ll take three hits from early game weapondry. Blue blocks can only take one hit. Be sure to move to different cover when you start to see deep cracks form.

If an enemy is behind one of these blocks, you can shoot it to trigger the super effect and destroy the cover. Make sure your hit percentage is at 0 percent to hit the block.

9. Be Wary of Friendly Fire

Grenades, Melee weapons, and Boomshots can hurt teammates caught in the blast. So before you fire, check to see if your teammates are in range of the blast. If they are, you can use skills like Rabbid Peach’s shield to protect against the blast.

10. Don’t Get Caught Off Guard From Mobile Enemies

Enemies are able to use pipes, meaning that they can potentially flank you. Some enemies can even use super jumps to cross gaps and flank you that way. So be aware of how enemies can flank you in different ways and don’t get caught in the crossfire.

11. Here’s How to Get Past Enemy Reaction Abilities

Ziggys can use reaction abilities similar to Mario’s Hero Sight, allowing them to automatically shoot anyone who gets in their line of sight. To bait the reaction shot, you can send out a sentry with Luigi or Rabbid Peach and have it take damage. You can also use Rabbid Peach and Rabbid Yoshi’s shield abilities and then run into the line of sight to bait the attack that way without taking much damage.

12. The Skill Tree Can Be Reset

If you don’t feel like filling up the skill tree, you can press the Y button to have the game optimize abilities for you.

If you’re struggling in a battle, try changing the roster of your heroes. Maybe a match will play out better with different heroes.

If a teammate took too much damage in the last battle, that’s a good time to swap them out.

Also be sure to update your heroes’ weaponry often so they can fight better as the game goes on. Don’t just invest in three heroes only. You don’t have to have the latest equipment, but make sure your weapons are strong enough.

14. Use Rabbid Peach for Escort Missions

Rabbid Peach has a healing ability that restores the HP of all allies around her including herself. This is perfect for escort missions as you automatically lose if the person you’re escorting loses all HP. By keeping their HP topped off, you’ll ensure that doesn’t happen.

15. Don’t Hesitate to Use Easy Mode

When starting a match, you can activate easy mode with the Y button. Easy mode heals all damage taken in the previous match and grants heroes an extra 50 percent HP. Activating easy mode does not reduce your performance rating at the end of the match. So if you’re struggling in a match, don’t hesitate to use it.

Thanks again to Ubisoft for many of the great tips. 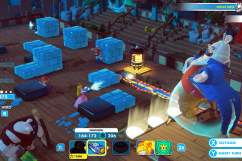