The results for the latest Splatfest for Splatoon 2 are in and it looks like mayo caught up to ketchup.

Splatfest is where players decide to be on one of two teams and then battle it out with each other in Turf War matches. For this Splatfest, players had to choose which condiment is superior: mayo or ketchup. People on the winning side earn slightly more Super Sea Snails which are used to add new ability slots to gear or replace an ability and earn you the old ability chunk.

The two teams were then judged on who had the most wins. The wins were divided up between solo matches, where individual players were put into teams; and team matches, where friends got together as groups and fought each other. Team Mayo earned the most wins for both solo matches and team matches with 52 percent and 51 percent of wins respectively.

Despite being crushed in the popularity contest, Team Mayo came out on top thanks to them earning the most wins in matches.

If you missed this Splatfest event, don’t worry as Nintendo said that Splatfest support will continue for at least two years after launch according to our report in July.

Splatoon 2 is earning favorable reviews with an average score of 83 on Metacritic based on 82 critics. Our review on Heavy.com game the game a score of eight out of ten, making note of its unique gameplay and improvements to the original game but criticizing the retention of problems from the original. 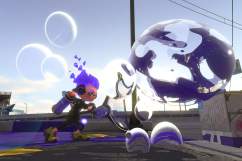