Developer Bungie’s newest FPS/MMO hybrid Destiny 2 is almost here and it’s looking to improve upon the original in every way. Featuring a brand new story and all new loot, this title will act as a fantastic jumping off point for anyone who is new to this series. However, there are currently three platforms you can play Destiny 2 on, so it’s important to pick which version is best. Given there is not only exclusive content for the PS4, but also a PC version it’s going to be a difficult choice if you only plan on getting one copy.

For those debating between the Xbox One and PS4 copies, we highly recommend purchasing Destiny 2 on Sony’s consoles. This is largely because there is a lot of exclusive content coming to this version of the game. Here is all the extra  content that you will get if you purchase this title on PS4:

Since it could take several months or even years before Xbox/PC players see any of the PS4 content, this is the ideal platform to play it on. However, none of this content will directly affect the main story or game for Xbox One players, so don’t feel pressured to switch if all your friends are on Microsoft’s platform. If you do have a choice between the two, PS4 is the best choice overall for base consoles.

Yet, if you can wait until October and don’t mind the omission of extra content then the PC is the best overall platform to play Destiny 2 on. With an unlocked framerate, multiple graphical settings, and Battle.net support this is the best way to experience Bungie’s new game. The game feels fantastic on mouse and keyboard, but it does have controller support for those uncomfortable with a traditional set-up.

The only questions you’ll need to ask is: does having the PS4 exclusive content matter and can you wait a month for it to come out on the computer? While some of this choice does come down to personal preference, PC is the best looking and performing version of Destiny 2. 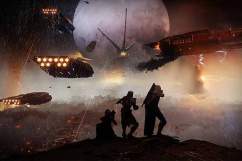 Destiny 2: When Does Trials of Osiris Start?